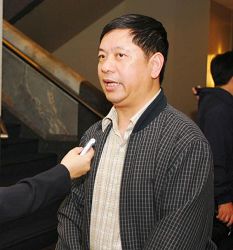 Liu Xuan, a freelance writer with ObserveChina.net and a news commentator saw the Spectacular for the second time. Liu said he was still thrilled, mostly because of the company's artistry, "It's very artistic, and the choreography and dancing are of high standard. The dancing and singing were especially outstanding. The show has inherited and added glory to classical Chinese dance, including folk dance."

"I noticed that many audience members were not Chinese. They look excited. For them, the Spectacular is an enjoyable event combined with art and culture."

Immigrant from China: "This is real art." 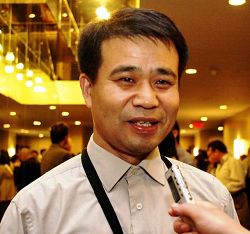 Wang Haoran, an immigrant from Beijing.

Wang Haoran, who came from Beijing, is a scientist working at the University of Toronto. Having lived in China for many years, he said the Spectacular held special meaning for him. "When I watched the show, my heart was literally touched. I felt my heart warm. It was well worth it to come here and spend the money. I think it was important to see the show because it has had a tremendous impact on my attitude towards life."Every program was delicate and touching. Everything gives me the feeling of elegance and grace and manifests the profound Chinese culture."For those who have never seen any performance from China, they must be very impressed and think that Chinese people are amazing. This is real art."This was the first time I had ever seen 'Lady of the Moon' presented in this way. It was my favorite program. I had heard the legend when I was little. One could not find this kind of performance in China. The drumming was excellent."I can't remember ever seeing a performance like this. In China, it would have been deeply influence by the Party culture. According to my wife, it would have been one of the 'model plays.' But today I see the true, pure part of Chinese culture. Being Chinese, I am very proud."

Wang thought that the DPA's use of art to show the brutality of the persecution of Falun Gong in China in an easy-to-understand way was a good way to allow people to accept the idea it tried to convey. "Sometimes people don't like to hear something directly. I think the DPA did a great job."

College Lecturer: The Dances Are Creative 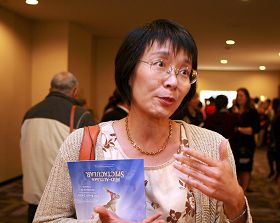 Song Yake is a college lecturer from Taiwan. This was the second time she had seen the DPA's show. "It's hard to find high level, quality performance in Chinese dance. The presentation of the water sleeves, the clouds, and the water waves was creative and terrific."

"The delicacy and elegance in Chinese dance is different from ballet. In ballet I do not sense the exquisiteness and softness. For example, in 'Water Sleeves,' as soon as they moved, a feeling of beauty, exquisiteness, and softness was conveyed."

Song is a Christian and could identify with the teaching of Falun Gong, Truthfulness-Compassion-Forbearance. "The 'Risen Lotus Flower' and 'The Power of Awareness' imparted important information that freedom of belief is good."

“Germany: Mr. Liu Guangrong Fired from a Chinese-owned Company in Dusseldorf for Raising Awareness about the Persecution of Falun Gong (Photos)”