Switzerland: Practitioners in Bern Set up an Information Booth and Talk with Many People about the Persecution (Photos)

"Thanks so much for telling me all about this. Good luck! I wish you success," said a woman after learning the details of the persecution from a Falun Gong practitioner on the street. 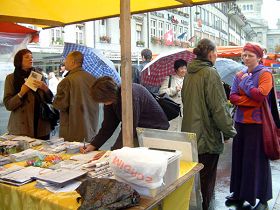 People at the Falun Gong information booth learn about the persecution 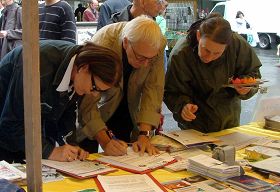 Signing their names in support of Falun Gong 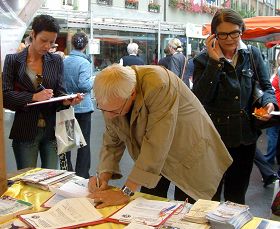 Signing their names in support of Falun Gong

On August 23, 2008, Falun Gong practitioners in Bern, Switzerland, set up an information booth exposing the CCP's persecution of Falun Gong. Many Swiss people saw the photos and asked for materials, and even signed their names in support of Falun Gong. After some people learned about the extraordinary healing effects of Falun Gong, they asked about how to learn the practice. There were also many locals who had many questions at first, but understood better after talking with the volunteer practitioners at the booth.

At around noon, a middle-aged woman said to a practitioner, "I have been to China and saw that in China there are many temples. There were also many churches and many people in them, and I didn't see this kind of persecution that you are talking about. I feel that people in China have freedom of belief."

The practitioner explained to her, "In recent years, China has certainly constructed many temples and churches, and there are indeed many people in them. But over the history of China, temples were a place where monks practiced cultivation and where every day people paid respect to Buddhas, and were not places for group sightseeing and profit-making. However, now those places have become places where the government and so-called monks make money. The Chinese churches sanctioned by the state are all controlled by the CCP. The members must first obey the Communist leaders, and then God after that. In China, the Catholic bishop is not appointed by the Vatican, but rather the CCP. In China there are people who indeed truly believe in Christianity, but in their desire to avoid being controlled by the CCP, they have formed underground churches in private homes. But during these years they have continuously been persecuted by the CCP. Many have been arrested and thrown in prison. Also there is this nine-year-long, brutal persecution of Falun Gong. More than 3,000 Falun Gong practitioners have been verified to have died as a direct result of the persecution, and many more have been arrested and detained. How could one say that China has freedom of belief?"

Then the woman asked, " But during this Olympics, when many reporters went to China, couldn't they investigate this?"

The practitioner said, "When the CCP has persecuted those people of faith, it has always been done secretly, and even most Chinese people don't know about it. How could China let foreign reporters investigate these things?"

That woman stopped for a while and then asked: "If you secretly practice, the CCP would not persecute you, right?"

The practitioner answered: "Actually, many are persecuted even for practicing privately in their homes. But, besides that, practicing the exercises in public is our right. We haven't done anything wrong, so why can't we practice publicly? Furthermore, this persecution has taken place, so those of us abroad have to step forward. Because in China so many people have been persecuted by the CCP, we have a responsibility to stand up and speak for them, to tell the public, and to stop the persecution by the CCP."

"After you did that, has the Chinese government changed?" the woman asked.

"At present, they still have not changed. However, more and more people in China and abroad have come to know the facts about Falun Gong being persecuted. Many people are supporting us, and demanding an end to the persecution. We believe that if we continue our efforts, all of this will change," affirmed the practitioner.

After listening to Falun Gong practitioners patiently answer all of her questions, the woman said, "Thanks so much for telling me all about this. Good luck! I wish you success!"

“Receiving a Rose Every Week”