(Clearwisdom.net) On the 19th of August, the French Falun Dafa Association held a press conference at Place de la Reine d'Astride near the Chinese Embassy in Paris to expose the Chinese Communist Party's (CCP's) persecution of Falun Gong. A member of the French Parliament, Ms. Francoise Hostalier, and the former head of the Chinese Department of France International Radio Station, Mr. Wu Baozhang came to show their support and give speeches. The event was covered by various media, including the Paris People newspaper. 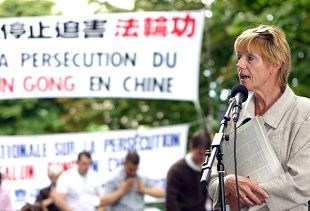 Ms. Francoise Hostalier, a member of French Parliament, is giving a speech. 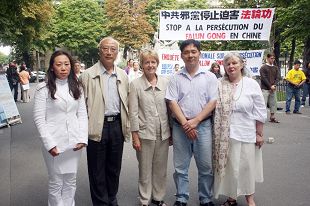 Attendees of the press conference, from left to right: Feng Yajun, a Falun Gong practitioner, Wu Baozhang, the former head of the Chinese Department of France International Radio Station, Ms. Francoise Hostalier, a member of the French Parliament, and Tang Hanlong, the chair of the Falun Dafa Association in France. 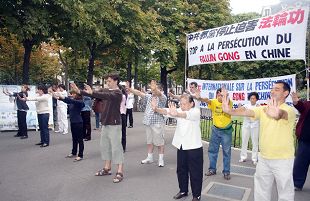 Demonstrating the exercises before the press conference

A few days before the closing ceremony, when the international spotlight fell on the Beijing Olympics, the French Falun Dafa Association held the press conference to point out the fact that the CCP failed to keep its promise to improve human rights in China, despite demands from international human rights organizations and western governments. The CCP blatantly trampled the Olympic spirit and used the Olympics as an excuse to accelerate the persecution and incarceration of Falun Gong practitioners.

The President of the French Falun Dafa Association, Mr. Tang Hanlong, made the first speech to condemn the CCP for persecuting Falun Gong practitioners for the last nine years. Mr. Tang introduced Falun Gong as a cultivation practice and its principles of "Truthfulness, Compassion and Forbearance." He urged everyone not to be deceived by the superficial prosperity of the CCP, to see its true nature, and work together to stop the CCP's persecution of Falun Gong practitioners.

Member of French Parliament, Ms. Francoise Hostalier, came to shore up support. Prior to the Olympics, Ms. Hostalier demanded to enter Tibet to conduct investigations but was refused a visa by the Chinese Embassy in France.

Ms. Hostalier urged media to continue to pay attention to human rights in China after the spotlight is turned off the Olympics. She was concerned about the CCP's repression of overseas dissidents who campaigned for the freedom of belief and the CCP's threat to democratic systems. Ms. Hostalier said, "We stand by you. In China as well as in other countries, those who dare to speak up and tell the truth, those who insist on their own religious beliefs and ideals under a government that has long been repressing its people. We stand by you."

A veteran media person, the former head of the Chinese Department of France International Radio, Mr. Wu Baozhang, also spoke at the meeting. Mr. Wu said, "Falun Gong is yet another case of injustice. Sooner or later the truth will be known. The sooner the persecution stops, the smaller the damage. This group will not give in as easily as other groups. If the CCP continues to persecute, it will only meet its own demise."

While in Paris, the head of Public Relations for New Tang Dynasty TV (NTDTV), Ms. Fang Fei, also took part in the event. Ms. Fang said, "Before the Beijing Olympics, a satellite company headquartered in Paris, Eutelsat, dropped NTDTV's broadcasts to Asia under the excuse of power failure. The discontinuation of NTDTV's signals has a direct link with the persecution of Falun Gong. NTDTV is the only non-profit TV station that dares speak the truth about Falun Gong and for other victims of persecution in China. As such it has long been a thorn in the CCP's side."

According to Ms. Fang, after Voice of America and Radio Free Asia left the W5 satellite, Eutelsat had plenty of power and space to restore NTDTV's signals. Ms. Fang urged Eutelsat to uphold France's ideals of freedom, and not side with dictators. She hoped Eutelsat would take this opportunity to choose the Chinese people, freedom and justice.

The Beijing Olympics focused international attention on human rights. As media dig deeper into the lack of human rights in China, the persecution of Falun Gong is also attracting more and more attention in the west. Last week, French news TV BFM aired 24-hour continuous coverage of a special Falun Gong report and was widely followed. As a result, this press conference was attended by the Paris People newspaper and French internet media.