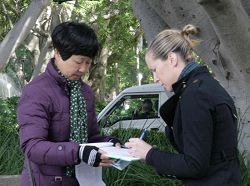 Four years later, a trial will be held on September 2008.

Before the trial, the practitioners held a series of activities in front of the Supreme Court, explaining the facts of the persecution.

The Chinese government has tried to interfere with the case, arguing that "diplomatic immunity" should shield the defendants from being tried. The Australian legal system is facing a test.

In just a few days, practitioners collected more than 5000 signatures on petitions which call for bringing the murderers to justice.