Hong Kong: Parade and Rally Calling for an End to the Violence against Falun Gong (Photos)

(Clearwisdom.net) Before, during, and after the 2008 Beijing Olympic Games, Falun Gong practitioners, who held peaceful protests against the persecution of Falun Gong in front of the Liaison Office of the Central People's Government in the Hong Kong Special Administrative Region, were harassed and attacked by officials from the Liaison Office. Two practitioners were injured. During the same time period, many Taiwanese practitioners were barred from entering Hong Kong by the Hong Kong customs authority.

In order to expose these attacks and harassment on the part of the Hong Kong government, which has given in to the Chinese government and become involved in the persecution of Falun Gong, practitioners in Hong Kong held a parade and rally, themed "Stop the CCP Violence and Bring the Murderers to Justice," on September 20, 2008. The parade was a peaceful protest against the attacks by the Hong Kong government and called upon people to uphold justice and protest the violence.

The site of the rally 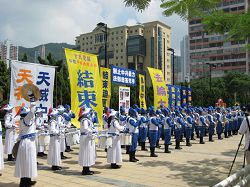 The Divine Land Marching Band took part in the parade 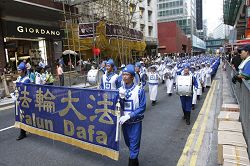 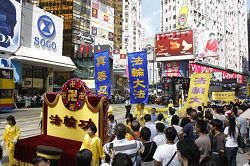 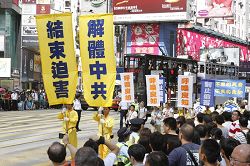 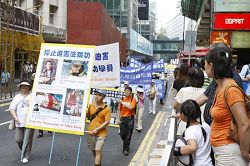 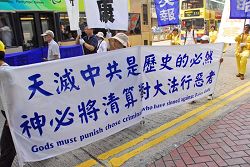 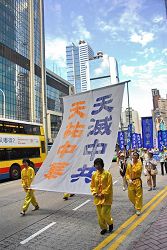 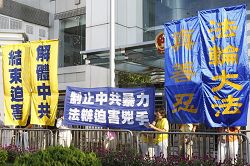 Falun Gong practitioners read a prepared statement in front of the Liaison Office. It reviewed the persecution, condemned the violence, and called for an end to the persecution.