Ms. Shi Guiying was a teacher at Anlei Elementary School in Hengshan District, Jixi City, Heilongjiang Province. On October 28, 2005, she went to visit her nephew in Zhangxinkuang, a neighborhood close by. Around 4 p.m. on October 30, her elder son received a phone call from Hengshan District Police Station saying that she had been taken to the police station after falling off a motorcycle, that she was unconscious and needed to be picked up. Ms. Shi's family took her from the police station to the hospital. She was found to be completely paralyzed and unable to speak. Ms. Shi passed away on September 10, 2006. Her husband and sons are still afraid to even talk about how she became paralyzed and died. 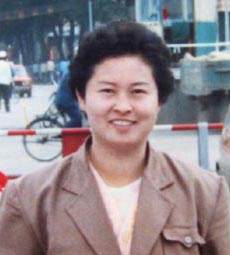 After Ms. Shi was discharged from the hospital, a friend went visit her at home. When the friend asked her, "Did the police beat you?" Ms. Shi became extremely fearful: her face turned red, and she started blinking very rapidly. Everyone noticed her reaction and thought it strange. They said there must be something wrong. Her family discovered that their telephone was being tapped, and all Falun Dafa practitioners who had called the Shi family recently were being monitored or harassed by the police.

The Henshan District Police Station never explained how or why Ms. Shi fell off the motorcycle. No time or location of the purported accident was provided. No information was given about any first aid or emergency room visit. Who was the rider or owner of the motorcycle? Why didn't he explain to the family what had happened or take responsibility? Why did the police not make the rider or owner show up? Is there such a person at all?

Before she passed away, the police came to check on her on a regular basis, asking questions like, "How is she doing now?" When she was taken to the hospital, there were many bumps on her head. Those obviously didn't come from falling off of a motorcycle, since Mrs. Shi's face did not sustain any bumps or wounds. The CT scan showed severe intracranial bleeding on the left side, which corresponded to a big bump on the left side of her head.

Many more questions remain to be answered. If her injuries were caused by falling off a motorcycle, why were there wounds on the medial surface of her right arm but not on the lateral surface? How could she have fallen in such a way that caused bruising and bumps on the inner side but not the outer side? A CT scan showed that the hemorrhage affected a large portion of Mrs. Shi's brain, and motor control and speech areas were affected. 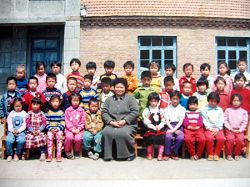 Mrs. Shi and her students in Anlei Elementary School

Mrs. Shi Guiying was born in 1957. She lived in Group 12 of the Hongzhuanwei, Youyi Community in Henshan District, Jixi City. Her heels had caused her trouble for years and she couldn't walk without getting frequent nerve blocks. After she started practicing Falun Dafa in March, 1998, her heels never bothered her again.

The alleged accident happened when she went to visit her nephew in the same district on October 28, 2005. On October 30, policemen at Hengshan Police Station told the family that she had fallen off a taxi motorcycle, lost consciousness at the scene, and was brought to Hengshan Police Station. To identify her, police searched her bag and found several pamphlets about Falun Gong, a copy of Zhuan Falun, and her home phone number on a TV set receipt.

Around 4 p.m., her elder son got a call from an officer with the Hengshan Police Station asking, "Did your family buy a TV recently?" He was confused and said, "How did you know we just bought a TV?" The officer replied, "I am from the police station. Your mother is injured. She fell off of a motorcycle and was brought to the Hengshan Police Station. You must come and take her home now."

Ms. Shi's son and neighbor went to the police station together. Her husband was working that night and her son couldn't get hold of him. At the police station, they found her lying on a couch unconscious. Her pants were wet with urine. A copy of Zhuan Falun and several Falun Gong pamphlets lay on a table beside her. Yu Baoshan, the deputy-director of the police station, and another policeman talked to her son in a separate room for about 10 minutes. They then urged the son and neighbor to take her to the hospital right away. Seeing his mother in such terrible shape, the son couldn't think clearly at the moment. He took her home with the help of the neighbor.

About 8 a.m. the next morning, the family took Mrs. Shi to the Xiaohengshan Hospital. She was in the intensive care unit for nine days. Doctors examined her thoroughly and found the severe intracranial bleed, big bumps with diameters of 6 to 7 centimeters on her head, and another big bruise on the inner side of her arm.

While the Shi family was at the hospital, Yu Hu, Wang Zefeng, and two other policemen from Dahengshan Police Station searched the Shi residence without a warrant. Neighbors saw the police take away a compact disk from the home. Wang Zefeng also went to the hospital to threaten Mrs. Shi's family, but they reprimanded him.

When asked how Mrs. Shi got hurt this bad, her husband didn't dare to say anything. He looked scared. Mrs. Shi was hospitalized for 18 days total, but her total paralysis was incurable. After coming home, the family noticed that, although she had feeling in one of her arms, she could not move it, and the large bruises now showed clearly. Ten days later, the big bump on the left side of her head was still there. Ms. Shi could not speak, move, eat, or use the bathroom by herself. She was fully dependent on her son.

She passed away on September 10, 2006, without being able to say one last word.

Ms. Shi's family mainly lived on her income and their vegetable field. Her husband and two sons make very little income. Although they registered in the welfare system for basic living allowances in 2007, they have yet to receive any welfare benefit. Her husband is now working in a small mine to make ends meet.