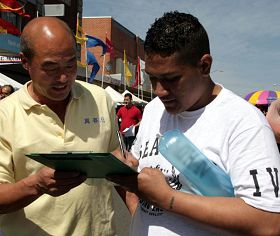 Besides Falun Gong introductory materials in the booth, there were Nine Commentaries on the Communist Party in both Chinese and English and information on quitting the CCP. Practitioners also used a projector and a large screen to introduce Falun Gong and expose the CCP's persecution. Many people showed interest.

One Australian girl in her 20s stood quite a while in front of the projector. She was shocked that in today's civilized world the CCP is involved with organ harvesting from live Falun Gong practitioners. She asked for more details and listened to a practitioner's explanation. She signed the petition to stop the persecution and asked where she could learn Falun Gong. She took the book Zhuan Falun and wanted to read it carefully.

City Council candidate Yang Sang came to the booth with his wife and signed the petition to stop the CCP's persecution of Falun Gong. He said he knew well the CCP's nature and supported practitioners' righteous actions of opposing the persecution and safeguarding their beliefs. He and his wife expressed an interest in learning Falun Gong.

A practitioner said that two weeks ago they invited city council candidates, the vice mayor and community leaders to participate in an activity. One candidate from the Freedom Party gave a speech after watching a Falun Gong video entitled, "Our community and city government need Truth-Compassion-Forbearance. If we unite different parties and people with these three words, it would be great for our people and the development of our community. I hope we can work toward this direction." His words won warm applause. Later he was elected in the city council election. He was very excited and sent an email at 1 a.m. to the practitioners to express his appreciation for Truth-Compassion-Forbearance.

“Brutally Tortured into Mental Instability, Ms. Tan Xiufen Jumped from a Building to Her Death”