As the number of people who have renounced the Chinese Communist Party (CCP) and its affiliated organizations on the Epoch Times website has reached nearly 43 million, Malaysia Center for Quitting the CCP and other concerned local people held supporting activities on September 14, 2008 in Taman Sri Muda in Shah Alam and downtown Puchong in Selangor. They displayed photos, held rallies and parades to help people learn about the Chinese Communist Party's (CCP) tyranny, and the grand wave of "three withdrawals" taking place in China right now. 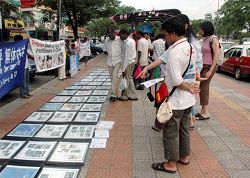 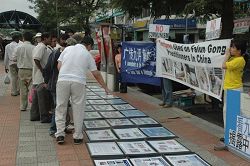 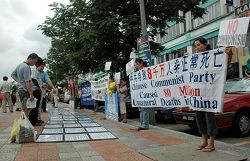 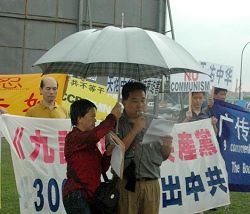 The activity supporting Chinese people quitting the CCP and its affiliated organizations was first held at 1:00 p.m. in the Taman Sri Muda, where there are the most people of different nationalities in Shah Alam. The residents mainly include Chinese, Malays, and Indians. There are also people from Indonesia, Bangladesh, Pakistan and Vietnam. Volunteers from the Center for Quitting the CCP exposed the Chinese Communist regime's persecution of Falun Gong, in particular, the CCP's crimes of harvesting organs from living Falun Gong practitioners. The volunteers also distributed CDs and books of the Nine Commentaries on the Communist Party, helping people gain more understanding of the CCP's true nature.

Downtown Puchong--Supporting the "Three Withdrawals" despite the rain

At 6:00 p.m., volunteers of the Malaysia Quit-the-CCP Center went to another city, Puchong, and held a rally in the downtown area. The Divine Land Marching Band also came to lend its support. The rally was organized in Malay, English and Chinese respectively. It rained at the time, but the local people watched the rally while standing under awnings.

Ms. Yang, spokesperson for the center said, " 'Malaysia Center for Quitting the CCP' has been unceasingly clarifying the facts at the night fair in Kuala Lumpur for over three years. They have met many overseas Chinese who had misunderstandings at the beginning, but after learning the truth, many of them renounced the CCP and its affiliated organizations. The center provides service for many tourists from mainland China. In the past years, the volunteers of the center have been persistently and patiently clarifying the facts to Chinese people at Independence Square and other tourist attractions. Their compassion and kindness melted people's indifference and prejudice, and many Chinese people have gradually been freed from their Party-culture way of thinking."

Ms. Yang appealed in the end, by saying, "The CCP's disintegration is imminent. At this critical moment in history, I hope more Chinese people and overseas Chinese who have been deceived by the CCP's lies will see clearly the CCP's nature, renounce the CCP and its affiliated organizations, and choose a beautiful future for themselves, and their offspring."

A Chinese person's understanding after reading the Nine Commentaries

A Chinese person who came to Malaysia read the Nine Commentaries and wrote down his understanding. He said, "Since the publication of the Nine Commentaries, people have truly realized that the CCP is the root cause of all the suffering of the Chinese people. The CCP, a specter from the West, is an evil organization against humanity, therefore a grand wave of quitting the CCP and its affiliated organizations has been inspired. In the past three years, 43 million Chinese people have renounced the CCP and its affiliated organizations. At the same time, such a peaceful, rational and non-violent grand wave is also effectively and thoroughly disintegrating the CCP, because only after the CCP disintegrates, can we fundamentally put an end to the CCP's persecution of the Chinese people, and end the Chinese people's sufferings. Then the world's people can have truly safe and stable lives. People who have renounced the CCP and its affiliated organizations have also laid a solid foundation for the future of their lives."

The author appealed, "All overseas Chinese who have been deceived, intimidated and coerced by the CCP, please think it over: over the past 50 some years when the CCP ruled China, it has created huge karmic debts, which in turn has enraged the heavens. Gods will not pardon it, neither will human beings. Please see clearly the CCP's evil nature, leave a bright path for yourselves and choose not to follow the CCP to a dangerous end."

“Cultivating at a Materials Production Site in China (Part 2)”