On the evening of August 4, 2008, the Coalition to Investigate the Persecution of Falun Gong (CIPFG) hosted a Human Rights in China Forum at the Life Education Center in Gold Coast, Australia. Guest speakers included famous human rights lawyer Mr. David Matas, President of Amnesty International of Queensland, Mr. Maree Klemm, and former Queensland University professor Qiu Cuiliang. The audience and the Chinese Internet surfers who connected to the live video chat numbered over 200. 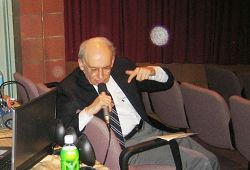 Mr. David Matas answers a question from an attendee online. 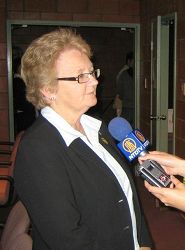 Representative of Gold Coast, Ms. Christine Smith is being interviewed.

The forum was hosted by a former senator of the Democratic party, Mr. Andrew Bartlett. The forum's title was "China Human Rights: Global Strategy". One of the authors of an independent report on the investigation of the Chinese Communist Party's organ harvesting from live Falun Gong practitioners, Mr. Matas, said he had traveled to over 40 countries to tell people about the brutal tortures Chinese Falun Gong practitioners have experienced. In his speech, Mr. Matas proved the authenticity of the independent investigation report, and pointed out that the Chinese Communist Party (CCP) is attempting to extend its dictatorship to the world. In its connection with other countries, the CCP always attempts to justify this persecution and block the information about the persecution. He condemned the CCP for preventing the world from learning the truth by spreading lies and coercion. He mentioned that Bond University of Australia canceled an invitation for him to speak for political reasons, saying this was a good example of such coercion.

The President of Amnesty International in Queensland, Mr. Kremm, gave a speech about the current situation of human rights in China, especially about Internet censorship and torture in the name of the Olympics.

In his speech, professor Qiu Cuiliang said the CCP has been persecuting the Chinese people since it was established. Today, Falun Gong is still being persecuted. He also pointed out that in the past few decades, the CCP regime has supported other dictators in such countries as North Korea, Burma, Sudan, Zimbabwe, etc. and it shall be responsible for the massacres happening in those countries. In the end, Professor Qiu said that China is now hosting the Olympics but also has severe human rights violations. If the world doesn't take action now, the next generation will not have a bright future.

The Forum was broadcast online and about 150 online users from China listened to the speeches. After the speeches, three guest speakers answered questions from the audience and online users with live translation.

An online user named "Fat Rhino" threatened Mr. Matas in front of the audience. He said, "Aren't you afraid of death? You are interfering in China's internal affairs and destabilizing China. You will be punished. We will retaliate against you." Other users online pointed out that "Fat Rhino" is just one of the Internet policemen sent by the CCP. Facing the death threat, Mr. Matas said, "In history, the Chinese Communist Party persecuted far more Chinese people than foreigners. If you do this (retaliation), it will backfire on yourself. You can only raise awareness of this matter and expose the CCP's crime. In China, a human rights worker perhaps will disappear after police threaten him. But in the outside world, if you dare to threaten people like this, it can only make people see the evil of the CCP and encourage more people to step forward to expose the CCP's evil nature. This is not what you want to see."

Representative of Gold Coast, Ms. Christine Smith has been paying close attention to Chinese human rights issues. She said, "I think (the speeches) are very meaningful. I came for the China human rights issues. In Australia, we don't see all the information, and this concerns me. I believe (tonight's) speeches were very good, very clear. I have heard about the live organ harvesting in China happening to Falun Gong and other jailed inmates. I am very concerned about this."

Next week, Mr. Matas will give a speech again at the 22nd World Organ Transplant Conference in Sydney about the CCP's organ harvesting from live Falun Gong practitioners.

“Authorities in Gaomi City, Shandong Province Harass and Arrest Falun Gong Practitioners Using Security for the Olympics as an Excuse”