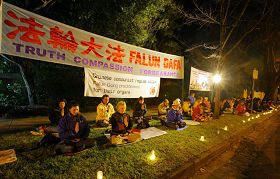 Urgent call for attention to crimes committed near the Olympic venues. 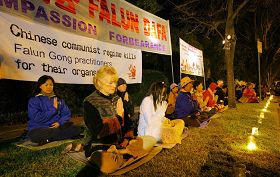 Dr. Michael Pearson Smith, event organizer and representative of the Falun Dafa Association in Victoria, Australia, said during his speech that the reason why they were there was because a guide to seven forced labor camps near the Olympic venues was released in the preceding twenty-four hours. As those fortunate people were cheering in the stadiums, tens of thousands of innocent people were suffering in forced labor camps and jails just a stone's throw from the Olympic venues. Eighty percent of them could be Falun Gong practitioners.

Mr. Zhang used to be an engineer in a government-owned enterprise in Dalian, China. Just because he refused to give up practicing Falun Gong, he lost four jobs in three cities in the past nine years. Five of the Falun Gong practitioners he knew lost their lives. He called on the international community to take responsibility and weigh profit against morality. "If the CCP hadn't used economic profit as leverage, would people have ignored its persecution against Falun Gong?"

Ms. Wang used to be a professor and had a beautiful family. However, she was thrown into prison in Beijing for two years and witnessed how Falun Gong practitioners were tortured. Some lost control of their minds after being tortured. Some are still missing. "Besides hard labor and physical torture, the spiritual torture can't be described with any words. You have to trade your spirit and force yourself to smile when your family is visiting because you aren't allow to let your family know anything is wrong with the forced labor camp."

On Aug. 1, the Coalition to Investigate the Persecution of Falun Gong released a guide to detention centers and labor camps near Olympic venues, including seven facilities in Beijing, Shanghai, Tianjin and three provinces.