(Clearwisdom.net) During the 22nd International Congress of the Transplantation Society in Sydney, Canadian human rights lawyer Mr David Matas was invited to speak at a forum hosted by "Doctors Against Forced Organ Harvesting". The forum was held on August 12, at the Novotel Hotel in Sydney's Darling Harbor. It called for concern and attention from the international community, especially transplant professionals, and to help put a stop to the Chinese Communist Party's (CCP) crimes of live organ harvesting from Falun Gong practitioners. 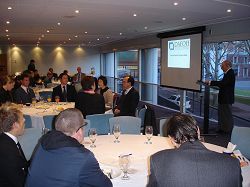 Dozens of doctors, lawyers and reporters attended the forum. Mr Matas introduced to organ transplant specialists as well as Australian media detailed findings from his investigation into allegations of organ harvesting from Falun Gong practitioners in China. Participants at the forum were deeply moved by the presentation, and spoke enthusiastically during open discussions. ABC radio and SBS television both made on-site reports, and interviewed the key note speaker as well as VIPs at the forum.

Representative for DAFOH, Dr Hughes first spoke and introduced the remarkable efforts of Mr David Matas in calling for an end to the CCP's organ harvesting from Falun Gong practitioners. During his speech, Dr Hughes called on transplant professionals and international medical associations world-wide to bring attention and put a stop to the illegal deeds happening in China, and to join the voices calling for independent investigation. He said, "International laws grant every person the right to decide whether or not to donate their organs. However, a group of benevolent people who suffer brutal persecution under the CCP for their belief in Falun Gong, had their organs extracted live and were killed as a result. This is completely against ethical values in the medical profession."

He also said, "On August 13, China's Minister for Health Huang Jiefu spoke at the International Congress for Transplantation. We hope that he will reply to the following questions: firstly, explain the source of organs for transplants in China; secondly, provide accurate records about organ transplantation to the World Health Organization, including the number of operations annually; thirdly, provide accurate documents to the World Health Organization, including what proportion of the organs are sourced from prisoners on death row, and the proportion from willing donors. "

Bring the criminals in organ harvesting to justice

At the forum, the co-author of "Bloody Harvest - Revised Report into Allegations of Organ Harvesting on Falun Gong practitioners in China", Canadian human rights lawyer David Matas pointed out that in China, people do not have the custom of donating organs. Many of the organs for transplant have come from prisoners, but since the CCP began its persecution of Falun Gong, the number of organ transplant operations has dramatically increased. After the publication of Mr Matas and Mr Kilgour's investigation report on organ harvesting, the CCP attempted to claim that the statistics in the report were fabrications, yet many of the statistics and evidence were sourced directly from government channels. Even though much of it has been removed from the Internet, they have kept an archive of the information for evidence.

Mr Matas said, "China's organ donation system and its laws have fundamentally remained unchanged. Based on the current prevalence of the Chinese Communist regime's act of organ harvesting, especially toward Falun Gong practitioners, I would like to raise a few requests to the International Transplantation Society. This includes, that the persecution of Falun Gong should stop immediately; stop all organ transplant operations in China until appropriate control, guarantee, legislative and political systems have been established; to bring to justice those criminals involved with organ harvesting, and so on."

Dr Stephen Lynch from Princess Alexandra Hospital in Queensland said that the hospital in which he works provides various training for surgeons, including transplantation techniques. He very much hoped Dr Yuan Hong could provide details on the name and training venue of organ transplant surgeons under training in Australia.

Dr Lynch said upon learning of the CCP's crimes of organ harvesting, his hospital requested Chinese hospitals and local governments to provide documents in writing, to guarantee they had not taken part in live organ harvesting. The Queensland government also adopted these procedures, and requested such guarantees from the Chinese regime, before providing training for organ transplantation. However he says the Chinese regime has never formally provided any response in writing. Dr Lynch knew of the government in NSW and hospitals in other states of Australia which adopted the same policies.

Why has mainstream media not widely reported this issue?

University lecturer Ms Milan Jirsa expressed her distress upon hearing these facts. She asked, "Why has such a big issue not been reported in mainstream media, does it have to do with economics and trade?"

Mr Matas replied that the CCP has attempted to infiltrate and pressure the media, governments and organizations in Western society. For example, the Canadian Broadcasting Corporation (CBC) aired a program with regard to live organ harvesting in China and the truth about Falun Gong, with interviews of himself and a number of Falun Gong practitioners. However they immediately received a call from the Chinese Embassy, and the CBC was forced to stop the broadcast, and edit the sections on organ harvesting before the program was aired again.

Dr Yuan Hong used the example of the hospital in which he worked, where any external media contact and interview is strictly managed by specific people. It was very rigid who can accept interviews and who cannot. Hence if foreign media did not conduct independent individual interviews, but went through official channels, it would not be possible to obtain true information or find relevant evidence.

During the question and answer period, Dr Yuan also said that during his ten years of work as a doctor in China, the hospital he worked for harvested organs from living prisoners before their execution; organs were also taken from patients who died in the hospital without the consent of relatives. According to his own experience, he believed that allegations of the CCP's live organ harvesting of Falun Gong practitioners were accurate.

Dr Yuan expressed his great relief on leaving Chinese hospitals, and pleaded for various groups in society to put a stop to these criminal acts. He also referred to the report by Phoenix television with regard to the Sujiatun concentration camp, that claimed foreign media did not find underground construction or traces of live organ harvesting. Yet he knew while studying at the university in Shenyang, that near his dormitory there was a large scale underground facility established in the 1960's.

Dr Yuan also said that any information publicized externally by the CCP is unreliable. He said, "The hospital where I worked was a training hospital. A Japanese medical foundation provided funds for training, but requested that Chinese officials budget the money according to their plans. Chinese officials signed the agreement with them, but never adhered to it. Once every five years, a Japanese official would come to inspect, and my hospital would enter discussions about how to create a uniform response for the Japanese inspection, to continue obtaining the funds."

During his reply to questions from participating doctors, Mr Matas said he believed the crimes of live organ harvesting still continue. As of now, China is still the country with the shortest waiting time for transplant organs. Waiting time limits for kidney transplants around the world are documented in detail in his report: Canada - 2555 days; England - 1095 days; America - 1825 days; yet in China it is only 15 days. The report documented voice recordings of telephone conversations with staff in Chinese hospitals, which revealed a giant pool of live organ supply in China formed by Falun Gong practitioners! It also pointed out that between 2000 and 2005, the donor sources of 41,500 organ transplants in China were unexplained.

Work together to put an end to the brutality

After the forum was brought to an end, many participants remained to interview or speak individually with David Matas and other speakers. They said that they learned a great amount of new information through the forum.

A university professor in Sydney said she had heard of the live organ harvesting, but was hesitant to believe the allegations completely. Yet upon hearing the speech from Mr Matas, the personal experiences of a doctor from China, and a Falun Gong practitioner, she felt shocked. She inquired about what she could do, aside from passing the information on to colleagues and friends. This professor and many participants signed their names on the anti-organ harvesting petition, and left contact details in hope of obtaining updated information.

“Croatia: Raising Awareness about Falun Gong in the Croatian Media”