Australia: Parade in Melbourne Calls for Ending the Persecution (Photos)

On July 20, 2008, the Falun Dafa Association in Victoria, Australia, hosted the July 20 Anti-persecution Parade and Rally in Melbourne's city center. Support from various groups of people in Melbourne called for the Chinese Communist Party (CCP) to immediately end the persecution of Falun Gong. 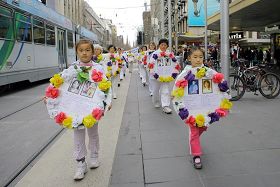 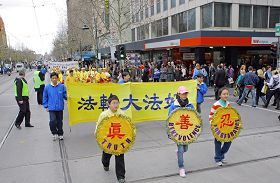 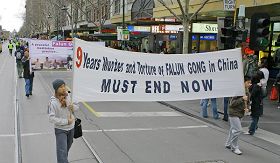 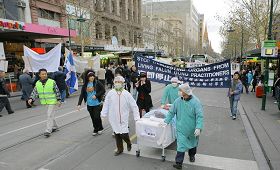 Anti-persecution parade and rally in Melbourne on July 20, 2008 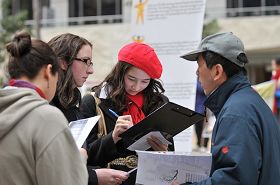 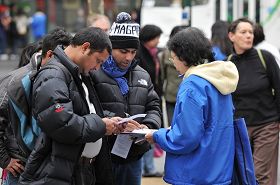 One by one, people sign the petition condemning the CCP's persecution of Falun Gong 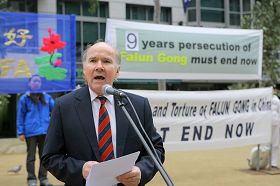 Mr. Peter Westmore, president of the National Civic Council in Australia, speaks at the rally 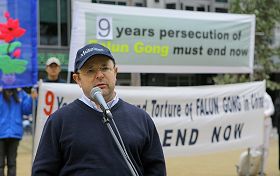 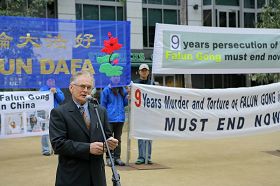 Mr. Gerard Flood from the Australian Democratic Labor Party speaks at the rally 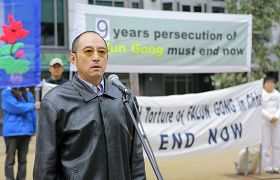 The anti-persecution parade was held in downtown Melbourne and began in City Square. Without the need for police guidance or protection, it traveled around the busiest streets in the city and returned to the square for the rally.

President of the National Civic Council: "It is my responsibility to be here today"

Mr. Peter Westmore, president of the National Civic Council in Australia, has traveled and worked endlessly to bring about improvements in China's human rights situation. He said, "Although I am not Chinese or a practitioner of Falun Gong, I believe that bringing an end to the persecution is something I must support." Mr. Westmore also said, "The reason is, the persecution of Falun Gong not only concerns Falun Gong practitioners, nor is it limited to China. It is impacts human rights and affects every one of us. This is why I will stand together with these courageous people. During such a long period of time, they have suffered so much pain. It is my responsibility to be here today. I want to express my outrage that these peaceful people have been persecuted for over nine years."

Former Head of China Analysis at Australia's Defense Intelligence Organization: The CCP is the cult

Dr. Paul Monk, former head of China analysis at Australia's Defense Intelligence Organization and co-founder of the AUSTHINK consultancy, is a China issues specialist. He thought it was extraordinarily meaningful to be able to speak at the rally.

"Former Soviet dissident Natan Sharansky published a book a few years ago entitled The Case for Democracy. In the book, he said the most basic way to determine whether you have a free society is to ask, "Do you dare to stand in an open square of the city and speak from your heart, without being worried about being arrested, harassed, shot to death, or run over by a tank. Today, we speak of the persecution here, but this is a forbidden topic on Tiananmen Square. You are not permitted to talk about this publicly in China. That is why we hold this rally here."

Dr. Monk also pointed out, "The CCP says that Falun Gong is a cult, however, it is they [the CCP] that adhere completely to the definition of what a cult is--it is the cult. China's record on human rights and corruption, on lies and propaganda is shocking."

During his address, Mr. Gerald Flood from the Democratic Labor Party said, "If you and I do not make our best efforts to ensure the Australian government implements its responsibilities and protects those groups under terrible persecution, then you and I will become accomplices. We will have betrayed their trust, betrayed our freedom, and we will be despised by future generations. Please think about this issue deeply. If we do not live up to up our responsibility now, how will people see Australians in the future?"

Chinese-in-exile and an academic in law, Professor Yuan Hongbin expressed his support, "During these nine years, Falun Gong practitioners have walked a painful road of iron and blood. Their resistance for the protection of their own spiritual belief and freedom has become a part of the heroic epic in contemporary Chinese history and won historical respect."

Professor Yuan said, "For nine years, the brutal Chinese Communist regime has monopolized all its resources attempting to completely eliminate Falun Gong, but they have failed. History has proven to mankind that a brutal dictatorship can't win over spiritual belief! It has been nine years that Falun Gong practitioners have continued to stride toward victory, as well as nine years that the CCP's brutal dictatorship has continued to step toward destruction."

Australian Public: The persecution should be exposed

Not only Australian officials, democratic activists, and human rights activists have called for an end to the persecution of Falun Gong, but also the general Australian public. After learning about the brutal persecution, they have expressed their support for Falun Gong. Although at times the supporters have been lost for words, a short conversation displays their sincerity and friendliness toward Falun Gong practitioners.

Adrian Lyons is an older man who moved to Australia from England. After carefully reading the messages on the banners and display boards, he said, "This is so terrible, it really should be exposed. What should we do [to end the persecution], how should we do it? No matter what we can do, we should go ahead."

Another Australian, Neil Macfie, said, "If the persecution ends, I will be very glad. As an Australian, I don't know what we can do, but we will give them [Falun Gong] support, definitely."

“Korea: Rally and March Held to Call for an End of the CCP's Persecution of Falun Gong (Photos)”