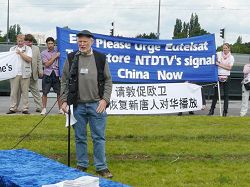 On July 4, 2008, Dutch Member of the European Parliament Mr. Erik Meijer sent out an urgent inquiry to the EU commission, demanding the commission to investigate Eutelsat about this matter and to use its influence to help restore NTDTV broadcast signals to China. Dutch National News Service, Dutch National Radio and many other media reported this matter.

In his inquiry to the EU commission, Mr. Meijer pointed out that Eutelsat's action very likely stems from its expectation to sign business contracts with Chinese government organisations. In view of the fact that the EU and Eutelsat are to cooperate to develop the Galileo Plan, Mr. Meijer said, "The EU should use its contact with this French company to encourage them to restore and maintain NTDTV broadcast to China before the Olympics' opening ceremony." At the press conference at European Parliament Headquarters in Strasbourg on July 9, Mr. Meijer said that only when we are always ready to protect freedom of information, can we truly guarantee human rights and freedom in Europe. Any passive reaction will not safeguard this freedom.

On July 7, at the European Parliament plenary session discussing major political affairs, Polish member of the European Parliament's human rights committee Ms. Hanna Foltyn-Kubicka said that although the exact cause of the incident is not clear yet, we do know who benefited from this incident and who lost. Tens of millions of viewers in China have been blocked and can only see the news from the Chinese Communist regime.

On July 9, at the European Parliament plenary session discussing the situations in China before the Olympics, vice-president of the European Parliament Mr. Edward McMillan-Scott pointed out that NTDTV's transmissions to China was stopped on June 16 and he earnestly requested the French government to help restore NTDTV broadcast to China.

In his speech representing the Green Party, the president of the Green Party in the European Parliament Mr. Daniel Cohn-Bendit also strongly condemned the Chinese Communist regime for its total control of the Olympic Games, including TV and radio broadcasts.

As of July 11, more than fifty members of the European Parliament have written to the CEO of Eutelsat Communications, requesting him to observe the principles of equality and diversity stipulated in Eutelsat's articles of incorporation and to immediately open NTDTV's satellite signals in the Asian sky. The letters said that based on the principle of freedom of information, the signatories express their deep concern about this matter. Eutelsat's decision affects tens of millions of viewers in China.

Many members of the European Parliament still clearly recall the Eutelsat incident three years ago. At that time almost one hundred members of the European Parliament wrote to the CEO of Eutelsat Communications, demanding Eutelsat to extend its satellite contract with NTDTV to broadcast to China. At that time, under the formidable international pressure, Eutelsat gave up its attempt to terminate its contract with NTDTV.

“Compassion Magazine: What a Difference a Strait Makes”