(Clearwisdom.net) The signal for New Tang Dynasty Television (NTDTV), an independent Chinese media, went down in China on June 17 due to "technical difficulties" with the W5 satellite operated by Eutelsat Communications. Carrie Hung, the spokesperson for NTDTV, said on June 28 that Eutelsat has yet to give NTDTV any formal explanation. 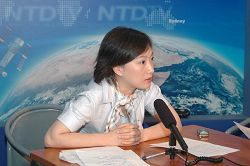 Carrie Hung, NTDTV spokesperson, calls for the restoration of the broadcast.

Ms. Hung said that NTDTV has already contacted Eutelsat. According to professionals in the field, Eutelsat has the ability to restore NTDTV broadcasts to Asia. Eutelsat stopped broadcasting NTDTV due to threats from the Chinese Communist Party (CCP).

The CCP promised to improve the human rights situation in China before the Olympics, Ms. Hung pointed out, but instead, people in China have less and less freedom. Recently the CCP directed the assaults against Falun Gong in Flushing, NY. Hung warned that Eutelsat will regret its collaboration with the CCP and that it is immoral to stop the broadcasts, which are welcomed by the Chinese people.

She said that NTDTV is the only free Chinese TV that can be seen in China. But since June 17, NTDTV has received many phone calls and emails from China, complaining they could no longer get NTDTV. She said that the Chinese audience is eager to see the restoration of the program, so NTDTV contacted Eutelsat, asking when it would happen, but Eutelsat did not give NTDTV any formal explanation or even a clear answer.

"Eutelsat has the ability to restore the signal quickly," she stated. She guessed that Eutelsat was using "malfunctioning of the power supply" as an excuse to shut down the broadcasting of NTDTV seven weeks before the Beijing Olympics.

According to their investigation, she said, the reason is that Giuliano Berretta, the president of Eutelsat, tried to do business with the CCP, and the CCP exerts pressure on Eutelsat.

On June 16, Alcatel, the producer of Eutelsat's satellites, signed a one-billion-dollar contract with the CCP. A few hours later, the broadcasting of NTDTV in Asia was stopped.

American and European politicians and people with a sense of justice strongly condemned Eutelsat and exerted so much pressure that Eutelsat renewed the contract with NTDTV in 2005.

Ms. Hung said that Eutelsat must obey certain rules and its own policies, which require equality, nondiscrimination, and respect for multiculturalism. From both a moral and a legal viewpoint, Eutelsat should restore the signal quickly. She said Eutelsat should support the freedom of information and not collaborate with the CCP, the biggest tyrant in the world.

NTDTV is also calling upon people with a sense of justice to help restore the broadcasting.