Japan: People in Sapporo Support Signature Drive Calling for an End to the Persecution

(Clearwisdom.net) At the end of June, during the busy tourist season in Hokkaido, the G8 Summit was held in the city of Sapporo. Falun Gong practitioners responded to the call for the global signature drive against the persecution and organized a local signature drive in Sapporo. The "Millions of Signatures Global Campaign" was initiated by the Coalition to Investigate the Persecution of Falun Gong (CIPFG), to appeal to Beijing to end the persecution of Falun Gong before the Olympic Games in August 2008.

(Clearwisdom.net) On July 12, the "Truthfulness-Compassion-Forbearance" Art Exhibition was displayed in an art center in Taitung, Taiwan. Many local government officials, artists, and citizens came to the opening ceremony. 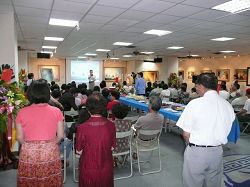