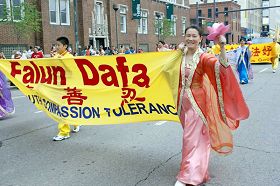 This is the eighth year Falun Gong practitioners have participated in the Columbus Independence Day parade. When the beautifully-decorated float and compassionate "Pudu" music slowly passed the review stage, the host sighed with emotion, "Oh, I already feel relaxed, they are so peaceful." After introducing Falun Gong and mentioning that the practice has spread to 80 countries, the host read aloud the words of one banner: "The world needs Truth-Compassion-Tolerance."

On the morning of July 4, Falun Gong practitioners came to Anderson Township. When a group of Asian children saw that mostly Asians formed the Falun Gong float, they were very happy, and they waved and smiled at practitioners, and imitated the exercise movements. After people received fliers, many read them right away. Practitioners on the float performed the graceful exercises, the Celestial Maidens waved at the audience, and several practitioners handed out fliers along the parade route.