(Clearwisdom.net) At 7:00 p.m. on July 9, 2008, an awards ceremony for the winners of the Blacktown City Festival Street Parade was held at the Blacktown City Hall. The Falun Gong group won the Champion Community Entry out of more than 70 entries. 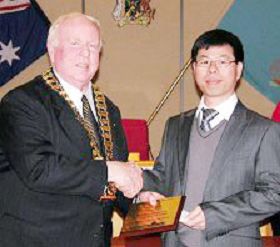 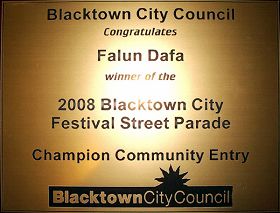 Mayor Leo Kelley said in the awards ceremony that Falun Dafa is a traditional practice system, which includes gentle exercises and meditation and follows the principle of Truth-Compassion-Tolerance. He said that since the practice was made public in 1992 in China, it has been spread to over 80 countries across the world.

On the morning of May 31, 2008, Falun Gong practitioners participated in the annual Blacktown City Festival Street Parade. Blacktown is a community west of Sydney. More than seventy groups participated in the parade. The Falun Gong procession included the Divine Land Marching Band, practitioners dressed as celestial maidens in beautiful traditional costumes, a decorated float and a waist drum team. Practitioners conveyed the message that Falun Gong is a peaceful practice beneficial to both mind and body, which teaches the principle of Truth-Compassion-Tolerance, but it is being persecuted in China.

The magnificent performance of the band, the grace of the celestial maidens and the powerful playing of the waist drum team drew the attention of the spectators and was very well received.

“Not Acknowledging the Old Forces”