Australia: Australians in Melbourne Support the Wave of Quitting the CCP and Condemn the Persecution of Falun Gong (Photos)

On July 5, 2008, Global Quitting the CCP Month, the Quit the Chinese Communist Party (CCP) Service Center in Melbourne, Australia, hosted a rally and parade in support of over 39 million Chinese people who have quit the evil CCP and its affiliated organizations. Falun Gong practitioners attended the activity, and exposed the CCP's nine-year persecution of the practice. Pedestrians and onlookers condemned the CCP's brutality, and voiced their support for quitting the CCP.

The rally began at Federation Square at 11:30 a.m., opposite the Central Train Station. The Divine Land Marching Band, composed entirely of Falun Gong practitioners, performed a number of pieces including "The Fa Rectifies the Cosmos" and "Falun Dafa is Good." The magnificent and powerful music drew many passersby to stop and listen.

The parade stepped off from Federation Square at 12 noon, amidst the brilliant notes of music from the Divine Land Marching Band. Large banners displayed an array of messages about the unstoppable wave of people quitting the CCP. Along the route, people were drawn by the parade, and many showed surprise and expressed admiration and support. Many people took photos of this unforgettable scene. 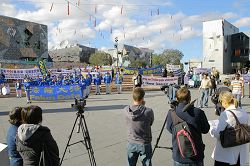 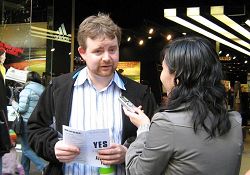 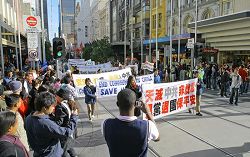 People take photos of the parade

Senator: "China will change. It's only a matter of time"

Green Party Senator Bob Brown happened to be attending an environment-related rally close by. He feels that the passing of Motion 127 [the recent Australian Senate motion which calls for the CCP to stop the persecution of Falun Gong in China] was really heartwarming, because for Australia, this was the first motion that has been passed in relation to policies in a foreign country. He said the current situation in China is very different from the claims of the Chinese (CCP) regime. He said, "I have been to China, the media reports are quite positive, but it was only when I arrived that I realized that all I heard was propaganda. I came to know that the media in China is full of propaganda, but China will change. It's only a matter of time."

Upon seeing the section of the parade that exposed the torture methods used on Falun Gong practitioners by the CCP, Ashley Jones was shocked. In an interview, he repeated, "Terrible" three times. He said, "I really cannot understand how this kind of thing can happen. We need to do something." He subsequently signed the petition calling for an end to the persecution.

Australian Chris Bennett stood before the parade crowd and watched for a long time. Chris said, "What you are doing here [helping people quit the CCP and exposing the persecution] is great. I went to China at the beginning of this year, and I saw a lot of police and security officers around. If you do not live in China it's hard to realize what is happening there now, but I think that even if you live in China you would not know, because the media is under a blockade. They don't report any of this."

When Mr. Ernie Okeeffe saw the parade procession that exposed the persecution, he said, "Obviously this is too cruel. As Australians and Americans, we should do something. We can't let them go on like this. Haven't we been deceived by the Chinese Communist regime?"

Joseph, who immigrated from Singapore, expressed his support for people quitting the Chinese Communist Party. He feels that this decision made by Chinese people will be received with respect and understanding. Joseph learned from the Internet, Asia Week, and Time magazine, that Falun Gong practitioners in China are arrested and persecuted, even though Falun Gong is a spiritual belief composed of an innocent group of people.

During the parade, many passersby who learned about the persecution joined the parade or helped distribute pamphlets. Dressed in full formal outfit, Michelle was prepared for a social gathering, but when she saw the parade, she joined in the march. Michelle said, "It is hard to imagine that [Falun Gong practitioners in China] are sent to prison only for practicing meditation. A rally and parade like we have today can spark a strong emotional understanding in the Australian people, and trigger a response."

During the event, many exchange students from China were eager to photograph the information displayed on the banners and display boards. Nicolas, a Chinese student from Shandong who came to Australia only three months ago, attentively listened to every speaker. He felt that among Chinese youths, the current trend of indifference to politics is worrying. Nicolas said this has been the result of current tactics in the education system, which will lead to an environment in which the CCP can act as they wish. Nicolas said, "People have the freedom of belief. Falun Gong is only an activity among ordinary people, it is not against the government - and even if it was, this is legal in a democratic country." He said he would tell friends and classmates about the quitting the CCP movement.

Tom is an exchange student from Yantai in Shandong Province. One year ago while he was still in China, he came across software recommended by friends which helped him break through the Internet blockade. Thereafter, Tom was able to read the Nine Commentaries on the Communist Party as well as many other truths and facts exposed overseas. Thus, on his own accord he came to understand the CCP's evil nature, and officially denounced his membership in the CCP and the Communist Youth League on The Epoch Times website. Tom feels that people should enjoy freedom of belief, and not be persecuted for believing in Falun Gong. He followed the parade as a way of voicing support, and eagerly videotaped the rally speakers and the parade.

A Chinese student who has been in Melbourne for five months had never before been exposed to the content on the display boards. He took photographs of the information, and carefully read through it and came to his own judgment. "In the mainland we can only hear one voice, but in free Australia, there can be two sides of an opinion," he said, before gladly noting down the website address for The Epoch Times. Before he left, he gave the thumbs up and repeated, "You are remarkable!"

Chinese immigrant Frank and his family carefully read the messages displayed on the banners in the parade. Frank expressed support for the quitting the CCP wave, which was the result of cooperation between Chinese people within and outside of China, and supported an end to the persecution of Falun Gong. Frank knew of the Nine Commentaries, and was opposed to the Chinese Communist dictatorship's persecution of Falun Gong practitioners. He did not personally have a deep understanding of Falun Gong, but was interested in learning more.

Mr. Jiang from Jiangsu could not hide his excitement upon seeing the parade. Word by word, he read aloud the messages displayed on the banners, and continuously photographed the scene. Mr. Jiang told the press that he has been in Australia for only two months, and today's event was an eye-opener. He has found that the newspapers in Australia tell a completely opposite story from those told in China, which he found difficult to adjust to in the beginning. He said he hoped to see and hear more in this free society, in order to come to his own correct judgment.