Boston: "I Will Stand with Falun Gong" (Photos) 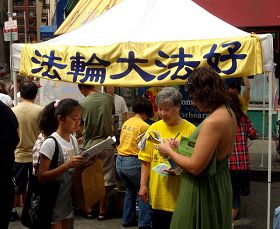 Signing to support Falun Gong and oppose the persecution 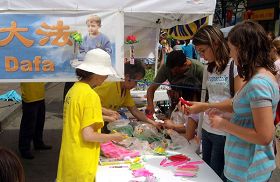 Some Chinese tourists didn't dare accept materials from practitioners. Practitioners patiently "clarified the truth" to them. After learning the truth, many expressed their respect for practitioners and signed the petition.

One American man didn't understand the Falun symbol. When he was asking practitioner about it, his son pointed out that the symbol is different than the Nazi symbol. Practitioners explained the meaning of the symbol, what Falun Gong is, and told him about the persecution. He and his son then both signed the petition.

A woman who said she was a Catholic, from Hong Kong talked to the practitioners. She said, "I am against the persecution. I will stand with you." She took many truth-clarifying materials for her family and friends.