Recently, the Sydney Quitting the Chinese Communist Party Service Center (CCP) has added a number of information booths to help people withdraw from the evil party.

Qing Sun, a representative from the center, said that the purpose of establishing these information booths in more districts is to expose the atrocities of the CCP and encourage Chinese people to withdraw from it. 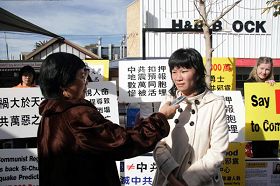 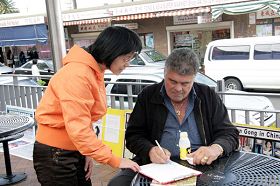 A resident signs a petition to support the service center 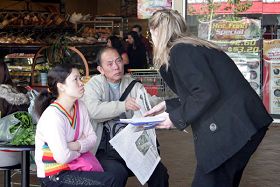 At the East Wood Quitting the CCP Service Booth, Sun told the reporter that the persecution will only let more people see clearly the CCP's evil nature. She said: "The CCP has done too many evil things and its fate is doomed. The mission of Quitting the CCP Service Center and Booths is to let more people see the party's nature and help them withdraw from it. Most Chinese people have been brainwashed by the CCP culture over the years. They can understand its evil nature only when they read the Nine Commentaries on the Communist Party. The East Wood Service Booth has been running for more than two years and it has helped many Chinese people withdraw from the CCP and its affiliated organizations."

"In addition, we have witnessed a gradual and yet positive change: more and more people have expressed their support for the service booths and the Quitting the CCP movement. For example, a Chinese immigrant in his 40s came to our service booth at East Wood last week. He cursed at us and refused to listen to our truth-clarification. After cursing, he left. Upon seeing this, another Chinese immigrant came to our booth and said: 'Don't be afraid. You are doing the right thing. Next time, tell them that this is Australia and your rights are protected. Continue what you are doing, you have done a good job.'"