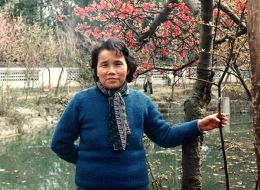 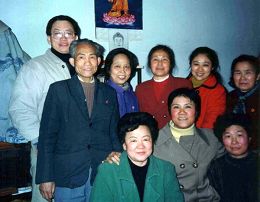 A pre-persecution Falun Dafa practitioners' group photo: Back row, first one on the right is Ms. Liu Yuanfang. Front row in the middle wearing green is Mr. Chen Guohua. Mr Chen was an employee at the Chengdu City Purchasing Station, Commerce Bureau, Liangshan Yi Prefecture. He was brutally mistreated by officers of the Jiefangbeilu Police Station. He died on December 18, 2005.

Ms. Liu Yuanfang was born on September 3, 1930. She worked at the Chengdu City Purchasing Station, Commerce Bureau, Liangshan Yi Prefecture as an accountant and later as an official in Human Resources. Ms. Liu had very poor health, suffering from pulmonary emphysema, heart disease, high blood pressure and severe cough. Once she began coughing, she would continue for one or two hours and the coughing would prevent her from sleeping. She often had fevers and needed intravenous injections every two or three days. The sixty-four-year-old Ms. Liu began practicing Falun Gong in 1994, and never had another fever. Her heart disease, high blood pressure and other illnesses all disappeared.

On July 20, 1999, the CCP began the persecution against Falun Gong. On May 22, 2000, the seventy-year-old Ms. Liu went to Beijing to appeal for Falun Gong. Because she practiced the exercises in Tiananmen Square, she was taken to Qianmen Police Station and placed in a wired cage. She was later taken back to Chengdu City by the Chendgu City Liaison Office in Beijing and detained at Jiuru Village Detention Center for fifteen days. Ms. Liu went on a hunger strike to protest the persecution while in detention.

After returning home, Ms. Liu was continuously harassed by the police from Jiefangbeilu Police Station. They forced her to report to them when she left home, and they had people follow her when she went grocery shopping. They also harassed her with phone calls, calling her often to ask, "Did you go anywhere?" This put enormous pressure on her.

As a result of the relentless persecution, Ms. Liu began to suffer symptoms of illness. She couldn't eat, and was taken to the Huaxi Hospital's critically ill observation room for treatment by family members. After one week, Ms. Liu passed away at 8 p.m. on September 10, 2003.

“Teacher Is Waiting For Us to Return to Cultivation!”