On May 31, more than one thousand Falun Gong practitioners and people from all walks of life rallied in Flushing, New York to condemn the Chinese Communist Party (CCP) for instigating hatred within the Chinese community and orchestrating violence against Falun Gong practitioners. Flushing is a community close to New York City, with a large population of Chinese immigrants. 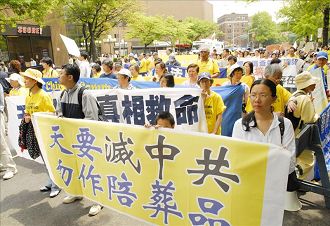 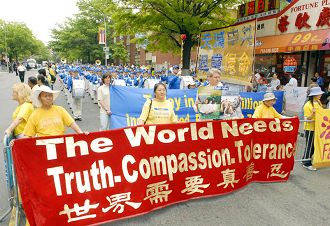 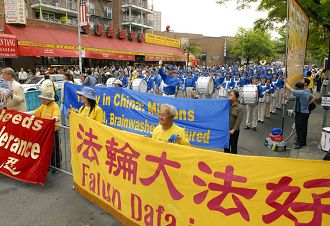 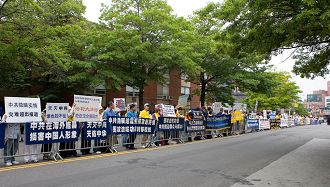 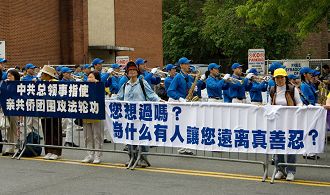 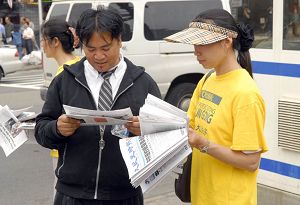 A passerby reads a special edition of the Epoch Times, revealing the truth behind the violent assaults against Falun Gong practitioners in Flushing

The rally took place as scheduled despite a forecast of heavy rain. Participants displayed banners which read, "The World Needs Truthfulness-Compassion-Tolerance," "Falun Dafa is Good," "Have You Thought Over Why the CCP Fears People Who Believe in Truthfulness-Compassion-Tolerance," "Zhou Yongkang Uses Spies to Spread Hatred and Persecute Falun Gong," "New York Chinese Consulate General Instigated Pro-Communist Chinese Groups to Attack Falun Gong," and, "The CCP Is to be Destroyed by Heaven, Quit the CCP to Ensure a Safe Future."

Rally Hostess: Appeal to All Chinese to Jointly End the Persecution

The rally hostess first gave an introductory speech. She stated, "Falun Gong has no political agenda. However, to awaken the Chinese people and the general public [to what is happening in China], we just clarify the truth of the persecution and appeal to all people to resist this inhumane and brutal persecution."

Regarding the massive earthquake that happened in Sichuan, she pointed out that the incident is more a human-caused disaster than a natural catastrophe. "As you know, China has leading techniques and talented engineers dedicated to predicting earthquakes. In 1976, for example, the Tangshan earthquake was accurately predicted. Likewise, the Sichuan earthquake was also predicted. However, the evil CCP regime didn't warn people in the quake zone, leading to the death of tens of thousands people. In addition, because of the corrupt system, school buildings were mostly substandard, leading to the death of so many children."

While failing to lead the rescue effort, the CCP is using the earthquake to spread hatred against Falun Gong. The rally hostess continued, "The CCP is trying to divert public attention from the failed government rescue efforts. The CCP accused us of not donating money to help victims of the quake. This is just another lie used by the regime to instigate hatred. We hope that fellow residents in Flushing clearly see the evil nature of the CCP and help us end the persecution."

Mr. Zhiyuan Wang, a representative of the World Organization to Investigate the Persecution Against Falun Gong (WOIPFG), then played a recording of a phone investigation. In the recording, Peng Keyu, the New York Chinese Consulate General, could be clearly heard telling an undercover investigator that the consulate was behind the violence against the Falun Gong practitioners in Flushing. 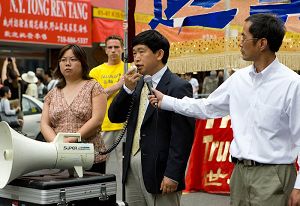 Dr. Dawei Gao said that in the past week or so the whole world has been watching Flushing as the CCP repeatedly manipulated local pro-communist Chinese groups to attack Falun Gong practitioners and volunteers of the Tuidang Service Center. "From the quake zone, our center has received countless statements to quit the CCP and its affiliated organizations, and revealing the tyranny of the CCP. They want us to help them to reveal the heartbreaking facts to the whole world.

"Every natural catastrophe further reveals the tyranny of the CCP. Please don't be misled by its propaganda. Zhou Yongkang, party standing member of the Central Politburo, plotted these violent attacks in Flushing because he is directly responsible for the death of so many students; Zhou was the party secretary of Sichuan and promoted many corrupt officials who were involved in the construction of those substandard school buildings. Out of fear, Zhou wanted to divert the public's anger toward Falun Gong, by accusing the group of not supporting quake relief efforts," Dr. Gao said.

Gao also urged Peng Keyu, the New York Chinese Consulate General who leaked the CCP secret, to defect from the CCP. "We welcome you to contact our Tuidang Service Center," he said.

"In China, 'The CCP is to be destroyed by Heaven' is no longer a slogan; it has been accepted by many people, including high-ranking CCP officials. It is now a fact that the end of the CCP tyranny is approaching and the party cannot escape justice. We have been working very hard to persuade Chinese people to quit the party so that they will have a safe future," Dr. Gao concluded. 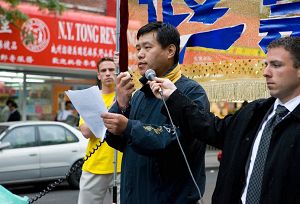 At the rally, Dr. Sen Yang, director of the Central US Falun Dafa Association, said that Falun Gong practitioners' noble demeanor shined during the violent assaults in Flushing. "When attacked, our practitioners never fought back and remained calm and peaceful. In contrast, the violence of the pro-communist thugs shamed every Chinese. Can violence cover up the CCP tyranny and can these assaults bring the children victims back to life?

"Falun Gong practitioners always care for others and make contributions to community welfare. During the 1998 flood of the Yangzi River, many practitioners tried their best to fight the flood and rescue victims, seeking no fame or gain. After the Sichuan earthquake, many practitioners have quietly donated money through various organizations. I myself donated through the Red Cross. I hope all this money will be delivered to people in the quake zone. 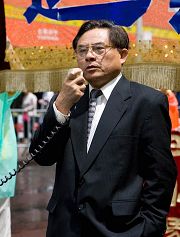 Wu Fan, the chief editor of "China Affair" website, reviewed his experience with Falun Gong over the past 9 years. "When the persecution started, I knew nothing about the group. I now fully support them because I know the practitioners are a group of good people following the principles of Truthfulness-Compassion-Tolerance."

In his speech, Mr. Wu also gave advice to the pro-communist people who were cursing at the practitioners. He said, "The other day, you guys surrounded an older female Falun Gong practitioner and cursed at her. She was not moved at all and she didn't curse back. What does this tell you? First of all, this old lady is very capable as she had the energy to attract all of you; secondly, she was capable to deal with so many of you together. Don't underestimate Falun Gong. Justice is with them and thus they are fearless. They are not after fame or gain. I support them after learning about this. Because I support them, I flew here to voice my support."

Mr. Wu also urged the Hu-Wen regime (the current Chinese president and prime minister) to end the persecution. "Stop the persecution now, and don't take the blame for the Jiang Zemin regime (Jiang started the persecution in 1999 when he was president of China). Don't become accomplices of the regime. Good will be rewarded and evil will meet retribution. Don't defy this principle; it will be too late for regrets when retribution comes."

Wei Jingsheng: The CCP Is Destroying Itself

His first comment to the pro-communist group was: "The CCP has brought the cultural revolution to the US."

Wei believes that the people involved in the Communist violence fall into two categories. "Some are communist officials and their relatives who have benefited from the regime. It is normal for them to be involved in these violent acts as they love the CCP and hate democracy; the second group are people who are manipulated by the CCP to insult and assault other Chinese people."

"What you are doing is violating your own rights and harming yourself!" Wei warned the group across the street. "When the violence is reported by the US media, the image of Chinese people is hurt and every one of us is ashamed. While the CCP has its political motives, overseas Chinese should not be deceived by it and should not do more harm to our image.

"We all love our country. I hope you will be clear-headed and safeguard the image of China. The CCP is destroying itself. I hope you all will live a better life in the US."

While there were still some pro-communist people cursing at the practitioners from the other side of the street, many passersby expressed their support of Falun Gong.

A 70-year-old African-American woman said that she knew about the persecution and the atrocities of harvesting organs from living Falun Gong practitioners. She said, "I don't practice Falun Gong, however, I believe they are good people. We all need truth, peace, and compassion." She gave the thumbs up and said to the practitioners in Chinese: "Hao, hao, hao! [Good]" Pointing to the small group which was cursing at the practitioners, she said: "Bu Hao." [Not Good]

Ms. Caiyun Ye lives in a nearby town and came to Flushing for a doctor's appointment. When passing by the rally, she was cheered up by the speeches and said to the rally participants, "Keep up your effort. God Bless you!"

When asked why she chose to support Falun Gong, Ms. Ye said, "Falun Gong has made a good contribution to humanity. I learned about the organ harvesting atrocities from the newspaper. The CCP is just so evil. Destruction of the CCP is good for all of us." Ms. Ye also condemned the thugs across the street.

Mr. Qiu lives in Flushing and personally witnessed how the thugs assaulted Falun Gong practitioners. He felt very sad for these people who are being used by the CCP. "They have been suppressed by the CCP for so many years, and they are not learning from their own experience. Instead, they are here to attack fellow Chinese. Isn't this very sad?"

Regarding the earthquake, Mr. Qiu said, "There wouldn't have been so many casualties if there were not so many substandard buildings. In the first 72 hours of critical rescue time, the CCP blocked international rescue teams from entering the quake zone. How evil is the CCP? Heaven should destroy it!"