On May 17, 2008, in front of St. Michael's Church in central Munich, Falun Gong practitioners put up display boards to expose the Chinese Communist Party's (CCP) persecution of the Chinese people throughout history. Practitioners also held an art exhibition that showed the brutal persecution of Falun Gong practitioners. The exhibitions drew in quite a few people, many of whom, after seeing it signed their names to the "Anti-Persecution Millions of Signatures Global Campaign" petition. 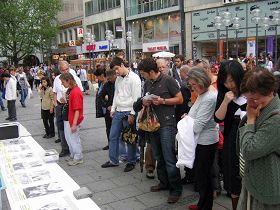 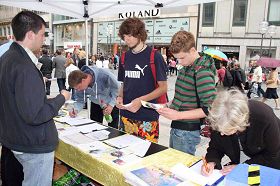 Many people signed their names opposing the persecution 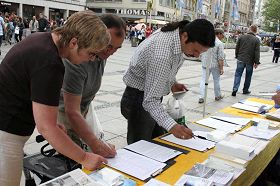 During the entire activity, many German people and tourists,including quite a few overseas Chinese, signed their names opposing the persecution. People were especially shocked when they learned about the CCP's organ harvesting from Falun Gong practitioners. Some tourists and overseas students from China also accepted the Nine Commentaries on the Communist Party and other truth clarification materials. There were also quite a few people who expressed interest in the Falun Gong exercise demonstration, and took photos of each exercise.