Rally Held in Flushing to Condemn the CCP-Incited Violence (Photos)

At noon on May 31, a rally was held in front of the Flushing Public Library to support quitting the Chinese Communist Part (CCP) and condemn the violence against Falun Dafa practitioners in Flushing backed by the Communist regime. More than 1,000 Falun Dafa practitioners and human rights activists participated. Though there are still local residents and passersby who have misunderstanding about Falun Dafa because of the CCP propaganda, more and more people stepped up to openly show their support to the practitioners. Now and then, some passersby told the practitioners: "Thank you. Go, Falun Gong." 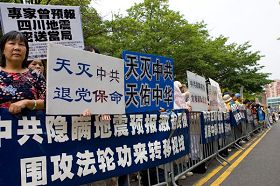 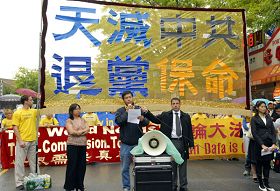 Before the rally, practitioners distributed a Special Edition of the Epoch Times which revealed how the Chinese Consulate in New York orchestrated the violence against practitioners. On one occasion, a man cursed at a practitioner who was distributing the newspaper. A passing-by woman was offended by the rude behavior of the man. When the practitioner asked her if she would like to read the special edition, she said firmly, "Yes, for sure." She also told the practitioner that she knew very well about these violent incidents happening in Flushing. "Don't be bothered by him, he is totally out of his mind," she told the practitioner.

Mr. Hong immigrated to New York City from Singapore. When the reporter interviewed him at the rally and asked whether he knew about the recent assaults against Falun Gong practitioners, he said, "I know very well. I have been watching what is happening in Flushing very closely. I don't think these incidents have anything to do with the earthquake in China. It is plotted by someone who wants to get a promotion: People in the Chinese Consulate want to get promotions and monetary awards by suppressing Falun Gong."

When asked about his feelings about the rally, Hong said, "It is pretty good. Looks like nobody from the CCP side came here today." When the reporter told him that there were about a dozen pro-communist people across the street, Hong looked at them for a while and said: "Just a few, maybe they ran out of money. As far as I know, they are paid $10 per hour. Perhaps, the Chinese Consulate is running out of money by now."

When a young man passed by the rally site, he raised his hands and made the victory sign to express his support. He told the reporter that his last name is Yuan and he immigrated to the US when he was was 12 years old. Apparently, he had a good understanding about free will and the right of free expression. "I am just a rational bystander. In a civilized society, everyone is entitled to express their opinions and appeal. This is a basic standard in a democratic country."

Regarding the pro-communist people who were cursing at the practitioners, Yuan said, "These people who support the CCP are ridiculous. Their violence can only let people see their nature. They are just thugs and accomplices of the CCP violence and they have no persuasive argument. Clearly, Falun Gong as a group being persecuted by the CCP is just here to appeal and the group has the right to appeal. For the practitioners, this is a good opportunity to voice their concerns because their voices can't be heard in China. Many people of my age know little about the CCP tyranny, including the June 4th, 1989 massacre in Tiananmen Square. How can they display the Communists' bloody flag and claim to be patriotic? There are many ways to express one's patriotic affection for China. For example, you can disagree with the government and still be a patriot."

When asked his opinion about the current situation in China, Mr. Yuan said, "The CCP claims to support freedom of speech and the Chinese Constitution also outlines these rights for citizens. In practice, however, the regime has never stopped persecuting dissidents and religious groups. There is no freedom of belief, association and religion in China. For this reason, Chinese citizens are not really "citizens" but "servants".

"Many people here actually know the truth and don't dare to step forward because of the hostile atmosphere created by the CCP propaganda. However, as long as you keep up your great work, we will see the change soon, as tyranny will eventually collapse. The CCP gives people no freedom and this is not acceptable," Yuan concluded.