Silicon Valley Senior Manager's Advice to Those Who Attacked Falun Gong Practitioners in New York City: Do Not Become Pawns of the CCP (Photo)

(Clearwisdom.net) On June 14, 2008, more than 3,000 Falun Gong practitioners from different parts of the United States gathered in Flushing, New York to hold a large-scale rally and parade to end the persecution. Ms. Wang Feng, Senior Manager of a hi-tech company in Silicon Valley made a special trip by air from the Bay Area of San Francisco to take part in this event. On June 15, she held a placard with a text message entitled "Please Be Informed" on the streets of Flushing, advising the people who attacked Falun Gong practitioners not to become pawns for the Chinese Communist Party (CCP). 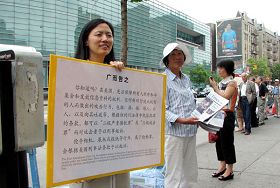 The text message on the placard read: "Do you know? In the United States, the Constitution guarantees everybody's right to peacefully assemble and disseminate information. For any attacking behavior, including, pushing, shoving, kicking, beating and spitting and so on, perpetrated against those who are exercising their constitutional rights, according to the provisions of New York's hate crime laws, the attacker will be subject to criminal prosecution, with charges of harassment in the second degree or 'third-degree assault.' Behavior such as snatching cameras, display boards or newspapers, constitutes looting, and will be charged according to the provisions of the Criminal Law in the United States."

Ms. Wang Feng said that some Chinese people who are controlled by the CCP have physically assaulted Falun Gong practitioners for the last month, in Flushing. Her parents were also assaulted. She has reported this incident to four Congressmen in California, and also delivered to them the recording of Chinese diplomat Peng Keyu's conversation in which Peng admitted his involvement in plotting the incident.

Wang Feng said that Congresswoman Zoe Lofgran had learned about the incident and was very concerned. Her office immediately expressed that they would arrange a hearing on this incident, and asked the FBI to thoroughly investigate the issue.

Wang Feng pointed out that attacks against Falun Gong practitioners were violent and against American law. "I come here to tell these people not to be fooled by the CCP, and not to work as its pawns men, doing illegal things for the sake of money."

She warned those accomplices of the CCP: Be sure not to do these illegal things for the CCP any more. She said, "Once you are punished by law, will the CCP guarantee your safety? At that time, the CCP will be brought to justice and be punished. You will find no foothold in the United States, and there will be no place for you any other place."

She pointed out that in history, all those who have been used by the CCP have never had a good ending, without exception. Why don't these people think about why Peng Keyu hid behind the crowd to encourage them to do these illegal things, but dared not stand at the front? Why were they so easy to be used? In fact, when all these scandals are known by everybody, these people will feel ashamed, and their later generations will also not able to hold their heads up.

As for some CCP spies spreading rumors that Falun Gong practitioners get paid 3.5 US dollars per hour for distributing truth clarification newspapers and materials, and some said 100 US dollars per day, Ms. Wang laughed and said, "I feel they are ridiculous."

"We came here to distribute truth-clarifying materials, and participate in activities. We want to stop the CCP's persecution. It's not only for the basic rights of Falun Gong practitioners, but also to uphold everyone's basic rights."

She said that when Falun Gong practitioners appealed for Falun Gong after the persecution started, nobody spoke fair words for the practitioners, but please take a look at the present situation: all appellants, no mater what their background or cause, are subjected to suppression by the CCP. "Today, they suppress Falun Gong, but if you do not stand up to uphold justice and stop the atrocities, tomorrow, you may be the next target of the CCP's suppression."

She pointed out that nevertheless, in the face of these violent assaults, Falun Gong practitioners have remained peaceful and rational. They have treated the attackers with compassion, and advised them not to be instigated and exploited. We persistently tell them what is really the best for them -- to stop assisting the CCP doing evil, and not to become pawns of the CCP.