(Clearwisdom.net) The photographs below document the bruises left on Falun Gong practitioner Ms. Zhang Jinbo ten days after she was tortured on April 14, 2008.

During nine years of persecution of Falun Gong in China, Zhang Jinbo has been cruelly tortured, and unable to marry or to live a normal life. Due to an extended forced labor term, her mental and physical health drastically declined. Her body incurred great harm from torture, and many diseases surfaced. Her residency registration was withheld, and would only be restored if she gave up her belief. It was forbidden for her to go abroad to work. She had to live a poverty-ridden existence in exile. The following is a description of the persecution Zhang Jinbo suffered, in her own words.

My name is Zhang Jinbo and I am a 39-year-old single female. I am from Yanji, Jilin Province. I started to practice Falun Gong in August 1996 and then went to Singapore to make a living in 1997. On July 20, 1999, the evil CCP started to persecute Falun Gong. In order to clarify the facts about Falun Gong to the government, I went home to actively appeal. To my surprise, I was sentenced to three years of forced labor on some trumped-up charges.

In the long course of persecution that followed, I incurred trauma to both my body and mind. As a result, I developed serious hypertension. Finally, the guards at the labor camp were afraid that I might die, and released me for medical treatment. I returned home but the persecution did not stop. They kept on harassing me, and made it impossible for me to completely recuperate. I had to live in exile, and eventually recovered after I resumed practicing Falun Gong.

I was taken to an isolated room, and one of the police officers that had taken me into custody started an interrogation. This officer was in his 40s, about 1.7 meters tall, and very slim with small eyes. He shouted at me, "Do you know where you are? We are the tools of the dictatorship and serve our country...." I listened to him and somewhat understood that I couldn't hope to be treated humanly and with conscience. And they were unwilling to listen to me. Three police officers took turns in this interrogation and I remained silent.

After about one hour, they realized that they had spoken to me in vain, and commenced their shameful torture. They first cuffed my feet and had me sit on an iron chair with a high backrest. They pulled my arms over and then behind the high backrest, and cuffed my wrists behind my back (Photo One).

Then they pulled my shoulders back, with my arms banded tightly with cloth strips. I at once felt excruciating pain in my arms and sweat rolled down my face. They then placed another iron chair, with a high backrest, in front of me and put my cuffed feet on top of it. Then my body was put into a V shape (Photo Two).

Policeman Wu then stood behind me and pushed my cuffed arms up with great effort, while a short policeman also yanked my cuffed feet up. I felt an excruciating pain at once. I almost fainted and remained barely conscious, thinking my arms and legs might be broken. (Photo Three) 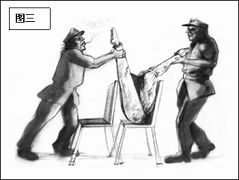 Illustration Diagram Three: An excruciating pain invaded me at once with this torture; I almost fainted and remained barely conscious.

They tortured me like this again and again. When they saw that I almost fainted, they stopped temporarily and then started to do it again. During this period, it became too painful for my legs so they loosened the pressure a little bit. Song Lihai also came to offer help. This intermittent torture occurred again and again, as I drifted in and out of consciousness. When I woke up, it felt so painful that my soul seemed to have left me. It was hard for me to breathe and I started to lose consciousness. At last, the police saw that I had lost consciousness, and were afraid that I might be tortured to death. They stopped the torture and put down my legs, with my arms still banded against the backrest. At that point I heard somebody ask what time it was and the other answered it was three o'clock. That is to say they had tortured me for almost 6 or 7 hours.

At about 10 a.m. on April 15, I was sent to Yanji Detention Center. When they loosened me from the iron chair, I collapsed on the ground and couldn't walk at all. But the police officers still cursed me and said I was pretending. At the detention center, the police inquired about what happened and I told them everything. After a doctor's exam, they found that my blood pressure hid risen as a result of the torture. On the second day at the detention center, two people from the 610 Office came to interrogate me. They said that they heard that I was tortured and wanted to conduct an investigation. I described the method of torture and showed them my bruises. But they later told me that the Domestic Security Division head claimed that the bruises were due to my resisting arrest and that they never tortured me. When I heard that bald-faced lie, I said, "You can take me to a doctor, and if he possesses a little humanity and conscience, he will tell you the difference between marks left from struggling and bruises left by torture." (After this torture, I couldn't raise my arms normally at all.) The officials from the 610 Office finally asked me, "Do you dare to be legally responsible for what you have alleged?" I looked to them, laughing, and said, "Did you do anything to me that was in accordance with the law?" I understood from the bottom of my heart that it would be impossible for me to expect them to clear the air for me.

To protest the persecution, I started a hunger strike. On the third day, they wanted to feed me forcefully. But due to my high blood pressure, they had to give me a transfusion. I was not aware of what they were putting into my bloodstream. My heart beat abnormally, and I felt my whole body go numb. At last I was sent to Yanji Hospital for emergency treatment. My blood pressure was 200 over 130. I was in danger.

Starting from the night of April 14, when I was arrested, until April 21, I had been without food and water. I lay at death's door, but the officers from the Domestic Security Division didn't care at all. They still sent me to Heizuizi Women's Labor Camp in Changchun, and wanted to sentence me to forced labor. The labor camp physician refused my admittance, and they had to release me.

This is the real experience of a common practitioner. Only because I refused to denounce my belief in "Truthfulness-Compassion-Forbearance," was I brutally tortured. But what I personally experienced is only the tip of the iceberg. Many more persecution cases, which are even crueler, have not been disclosed due to various reasons. I have exposed the evil here, and appeal to all kindhearted people of conscience to help stop the persecution of practitioners as soon as possible.