(Clearwisdom.net) The Malaysia Service Center for Quitting CCP delivered a protest letter to the Chinese Embassy and held a protest activity in front of the Chinese Embassy on June 12, 2008. The center protested the Chinese Communist Party (CCP)'s framing and slandering Falun Gong. The CCP hired thugs and spies to harass and attack volunteers at service centers for quitting the CCP in Flushing, New York, USA and other countries. Then CCP's photographers took video footage of scenes of the violence and manipulated the footage to slander Falun Gong. 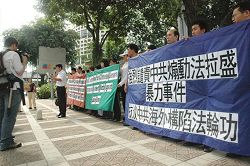 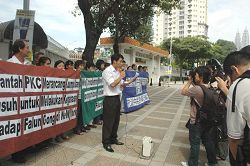 The event started at 10:30 a.m. and caught the attention of many media. The volunteers of the service center held banners that stated: "Strongly condemning the CCP's incitement of violence in Flushing, New York", "Protesting the CCP's framing of Falun Gong overseas", "Falun Dafa is good", etc and exposed the CCP's atrocities. The event was held beside a busy street. Many passers-by slowed down to read the banners.

Zhang Zijian, contact person of the Malaysia Service Center for Quitting the CCP, and Zheng Lisong gave speeches during the event. Mr. Zhang said, "The CCP's Central TV Station took video footage of the scenes in which CCP's thugs harassed and attacked the rally supporting the withdrawals from the CCP on May 17 and edited it to frame Falun Gong, making it appear that Falun Gong was interfering with disaster relief efforts. In addition, CCTV also altered the image of the banner that read "Heaven Destroys the CCP' to appear to read 'Heaven Destroys China' in order to frame Falun Gong and incite hatred."

On behalf of the service center in Malaysia he firmly declared, "We strongly condemn the CCP for ordering spies overseas to incite hatred, creating division in the Chinese community and committing violence outside of China."

Since May 17, Zhou Yingkang, Secretary of the Political and Judiciary Committee of the CCP, made a plan and ordered the CCP's consulate and spies in the USA to hire thugs and mobs and incite Chinese people who do not know the fact to abuse and attack volunteers and Falun Gong practitioners at the service center for quitting the CCP in Flushing, New York. Similar harassment and violence also occurred in Hong Kong, Japan and Canada. The CCP's extension of violence overseas has caught the attention of international community.