On the afternoon of June 8, 2008, the Quitting the CCP Service Center of Japan organized a large-scale rally and march in Yokohama. The rally was held to support the brave Chinese people who have quit the Chinese Communist Party (CCP) and its affiliated organizations, and to condemn the CCP's attack of volunteers at the Flushing Quitting the CCP Service Center. The supporters distributed many truth-clarification materials along the route, exposing the CCP's criminal activities. 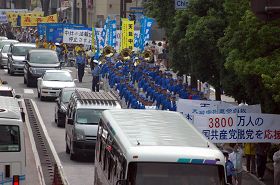 March goes through streets near Chinatown 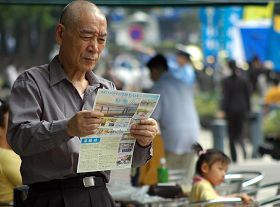 A passerby reads a flier 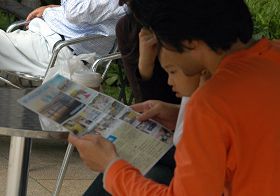 A mother reads a flier to her child

At 1 p.m., supporters rallied in the park, and Mr. Kunio Sato, representing Japan's Quitting the CCP Service Center, along with Mr. Ando Kan, deputy director of the CIPFG Japan Branch, Chinese writer Mr. Wang Tianzeng and others spoke at the rally.

Mr. Kunio Sato said in his speech that since The Epoch Times newspaper published the book "Nine Commentaries on the Communist Paty," over 38 million Chinese have since recognized the evil nature of the CCP and openly quit the Chinese Communist Party or its affiliated organizations. This huge number has scared the dying CCP so much that it began hiring thugs and sent agents to attack volunteers of the Quitting CCP Service Center in Flushing. They also slandered Falun Gong, using fabrications related to the Sichuan earthquake. The purpose is to instigate hatred against Falun Gong among overseas Chinese. 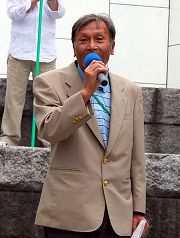 Mr. Anto Kan, deputy director of the CIPFG Japan Branch, spoke at the rally. He congratulated the 38 million Chinese who have quit the CCP and its affiliated organizations, and talked about the upcoming "Human Rights Torch Relay," due to arrive in Japan on June 18, 2008.

Writer Wang Tianzeng said, "The recent event in New York, where CCP thugs attacked volunteers at the Quitting the CCP Service Center, is terrible and concerning. This is a desperate attempt by the CCP." 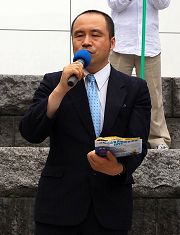 After the rally, the supporters began a two-hour march around Chinatown and the surrounding areas. The Divine Land Marching Band performance received much praise, and the participants also passed out many informational fliers.

On this Saturday afternoon, many people watched the march and applauded in support. One middle-aged woman told the reporter that she was a Chinese from Vietnam, and that she already knew about the CCP's persecution of Falun Gong and was upset about the recent CCP actions. She expressed her hope that the persecution will end soon.

Mr. Liu Hongfeng, director of the Quitting the CCP Service Center in Ikebukura, Tokyo, accepted an interview. In Tokyo, many Chinese live in the Ikebukura area. When they set up the service center, many learned the facts about quitting the CCP. After the Sichuan earthquake, the Chinese Consulate instigated some young Chinese students to attack the Ikebukura service center by tearing down the banners and flags. The volunteers at the service center peacefully talked to the students, and some of them accepted and read the Nine Commentaries on the Communist Party and recognized the evil nature of the CCP. Others still didn't want to hear the truth. One of the volunteers said, "We will continue our work to help them learn the truth."

After the attack, more Quitting CCP Service Centers were set up in Tokyo Station, Ueno, and Shinjuku, areas where many Chinese live. "Seeing that more and more Chinese are awakening, we are confident in continuing our mission." Liu said.

“My Father's Heart Disease Is Cured”