Belgium: Exposing the Crimes of the CCP (Photos)

On June 7, 2008, the Service Center for Quitting the Chinese Communist Party (CCP) in Belgium held activities in Chinatown in the center of Brussels, offering a service for quitting the CCP and supporting the 38 million Chinese people who have withdrawn from the Party and its associated organizations. Volunteers at the center disclosed the crimes committed by CCP agents of inciting hatred and staging violence. They also clarified the truth about the false charges made against Falun Gong practitioners in New York and other places related to the recent earthquake disaster. 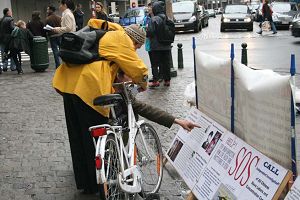 People learn about the persecution of Falun Gong 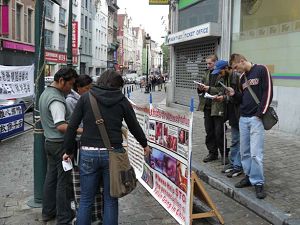 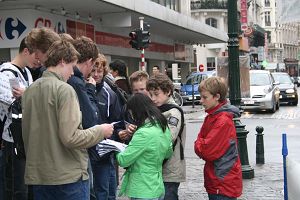 A group of students accepts leaflets

Many Chinese passers-by read the "Flushing Incident Special" published by the Epoch Times newspaper. Some Chinese people came over and asked specifically for this information. Exhibition boards demonstrating how the CCP tortures Falun Gong practitioners drew the attention of many people.

Ms. Agnes is a Belgian fashion designer. When she saw the exhibition boards about how Falun Gong practitioners are being persecuted in China, especially the atrocity of the CCP removing organs from living Falun Gong practitioners for profit, she told volunteers at the Service Center for Quitting the CCP, "I know that this is really happening now. Just a few days ago I heard the news from France Inter that the CCP has removed organs from executed prisoners for sale to the transplant industry." She asked for many leaflets and said she was going to distribute them to people she knows.

After learning about the persecution, a middle-aged western man said, "I can understand very well why you are doing this, because my father used to be a Nazi Party member. What the Nazis did in the past is the same as what the CCP is doing now." He added, "I bless you from bottom of my heart, and may God bless you."

Ms. Song, an IT professional in Belgium, said, "Although it's only been a short time since the Sichuan earthquake, this is also a national crisis. For the Chinese nation, it is really one disaster after another that the CCP has incited hatred and tried to shift the misfortune onto Falun Gong. We have the responsibility to have all overseas Chinese learn the facts. I certainly hope that Chinese people can now not only get a clear understanding of the earthquake disaster, but also recognize the disaster that the CCP has brought to the Chinese nation."

Ms. Pan, a volunteer at the Service Center for Quitting the CCP, said, "It is very important for the Chinese nation that we hold these activities to spread the Nine Commentaries on the Communist Party, promote quitting the CCP and its associated organizations, and support the 38 million Chinese people who have already withdrawn from the CCP. At the same time, these activities help people with a sense of justice in China know that they are supported overseas. Through reading the Nine Commentaries, many Chinese people have seen through the nature of the CCP. Under the rule of the CCP, 80 million Chinese people have died unnatural deaths. Most recently, with the Sichuan earthquake, even though the CCP had known about the earthquake prediction, it failed to report it and warn the people, which caused more innocent lives to be lost.

"Recently in New York, the CCP provoked brutal attacks on Falun Gong practitioners in Flushing, falsely accusing practitioners of interfering with fund-raising activities for earthquake relief. Just like all political movements in history, the CCP hopes to transfer its own political crisis and cling to power through the suppression of the people."

Ms. Pan continued, "During our recent activities, we have come across tour groups from mainland China, and we see that they are longing to hear the truth. Many western people have expressed their support for us and said that what we are doing is very important."