(Clearwisdom.net) Ever since the Chinese Communist Party (CCP) mobs started their violent attacks on volunteers working at the Quit the CCP Service Center in Flushing, New York, the international community has paid attention to the incidents. On June 6 and 7, 2008, the Queensland Quit the CCP Service Center in Australia held a series of activities condemning the behavior of the CCP's overseas special agents. 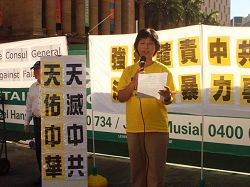 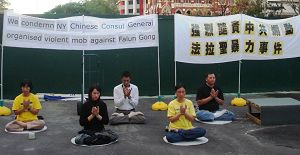 For two days in a row, volunteers with the Quit the CCP Service Center and local people who support the event gathered in front of the Chinese consulate in downtown Brisbane and Sunnybank, a major gathering place for Chinese people. They held banners and placards protesting the CCP and called on local Chinese and Westerners to work together to oppose the CCP's crimes.

Ms. Zhang, a volunteer at the Brisbane Quit the CCP Service Center, was present at the incidents in Flushing. She said, "We want to tell local Chinese people how the CCP is deceiving its own people regarding the Sichuan earthquake. We want everybody to know that that major earthquake was actually more of a man-made disaster than a natural disaster. I just came back from Flushing, New York, where I experienced the attacks against the service center for quitting the CCP by the mob organized by the CCP. I was assaulted several times. We only want to let everybody know that the CCP is not equal to China, and that the CCP is the root cause of the disasters in China."

Amanda, a practitioner, drove for two hours from the Sunshine Coast to Brisbane for the event. She said that people must stop the CCP atrocities; otherwise they will affect the whole world. She said, "I have been paying attention to the CCP's persecution of Falun Gong in China since 1999. All that Falun Gong practitioners have suffered is really horrifying. As Westerners living in a free country, I feel it is my responsibility to stand up against the crimes against humanity happening in China right now. In addition, the recent violence taking place in Flushing, New York, shows that the CCP not only persecutes Chinese people in China, it also extends its persecution into democratic countries overseas. I feel if I do not stand up against these things, they will affect people around the world."

Many people who support Falun Gong and oppose the CCP's persecution expressed their support for the event by signing a petition calling for an end to the persecution.