On May 18, 2008, Falun Gong practitioners held activities in front of Parliament Hill in Ottawa to celebrate the 16th anniversary of Falun Dafa's public introduction and the 9th World Falun Dafa Day. The Divine Land Marching Band, Lotus Performing Arts from Toronto, and Waist Drum Team from Ottawa performed at the event. 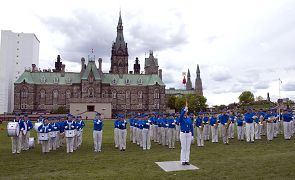 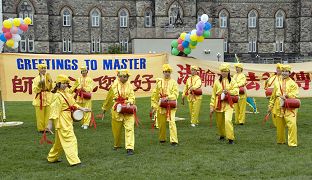 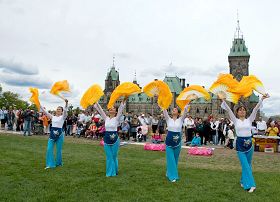 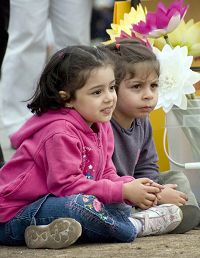 Little kids taking in the performances 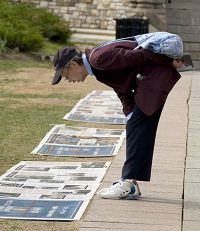 One week ago, Steven Harper, the Canadian Prime Minister, and several Parliament Members sent congratulatory letters to practitioners, praising their contributions to society. Ms. Zhou Limin, a spokeswoman for Falun Gong in Canada, said, "The Canadian Prime Minister has sent congratulatory letters to us three years in a row. Many PM's also sent letters. The Canadian people recognize the peacefulness and beauty of Falun Gong."

Ms. Zhou continued "A few days ago, the Quebec Court of Appeals issued a verdict on the La Presse Chinoise defamation lawsuit, ruling that the newspaper was guilty of libel in carrying articles defaming Falun Gong."

Sixty-one-year old Ms. He from Chengdu, China, learned about Falun Gong four years ago. She went to a show in Montreal, trying to raise awareness about orphans in China whose parents were tortured to death as a result of the persecution of Falun Gong. Ms. He's daughter started to practice Falun Gong after the show. Ms. He's husband also began to practice, and doing so improved his health dramatically. Ms. He said, "We cannot express our appreciation to Falun Gong enough."

Mr. Wang Gongshi of Toronto said, "Practitioners in more than 80 countries are celebrating World Falun Dafa Day. I believe that, soon, we will be able to do it all over the world."