(Clearwisdom.net) May 13 is World Falun Dafa Day. Recalling the past 16 years of Dafa flourishing around the world, we see that every practitioner has benefited in both body and mind from cultivating Falun Dafa. Each feels a strong sense of mission, and want to offer the opportunity to benefit from Dafa to any who wish to do so. 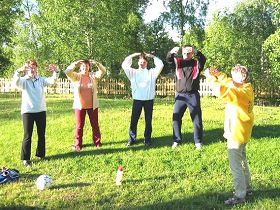 Learning the exercises in the park 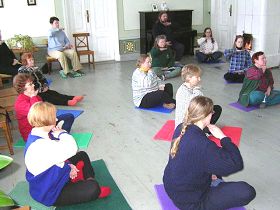 Learning the exercises in Jyväskylä City 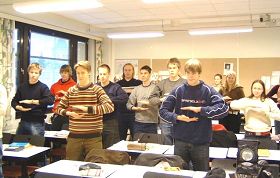 Students learn the exercises in a high school 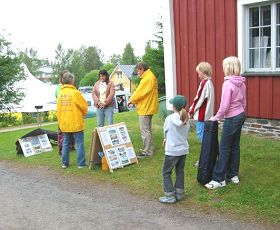 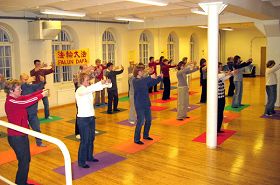 A practitioner taught the exercises in her hometown when she visited for Christmas one year. 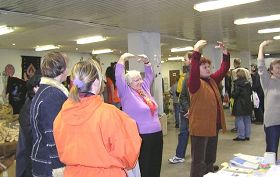 Teaching exercises at a trade fair 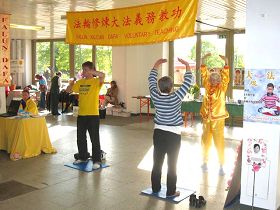 Master Li Hongzhi personally taught Dafa in Sweden in 1995. Some Finnish practitioners, born in Sweden, traveled across the Baltic Sea to spread Dafa in Finland.

In the early period, a young man, Hannu, lived in Oulu in northern Finland. He was a student then. He often traveled to Helsinki on weekends and holidays to teach the exercises to people without charge, but he had to pay his travel expenses saved from his meager savings.

Sinikka, from Jyväskylä, in central Finland, began the practice in 2000. She took her 5 year-old son to spread Falun Gong and clarify the facts in over 20 cities. I remember she once held two classes in Jyväskylä in one week. She taught at night after work. The first class had 21 people and the second had 8.

Anja, who also lives in Oulu, began the practice at the end of 2001. She soon thereafter recovered from the heart disease which had almost claimed her life. Her husband, Veijo, and dozens of her relatives thus believe in Dafa, and now also practice. The couple has endlessly traveled through most cities in northern Finland to spread the Fa. Spreading the Fa and teaching the exercises has become part of their life.

When she taught her the 3rd exercise, the woman indicated that she could not raise her right arm above her head. However, the practitioner remembered that when she learned the 2nd exercise, her right arm did raise above her head. So she took the old woman to a mirror and let her do the 2nd exercise first. She raised her right arm above her head. Then, she helped her to do the 3rd exercise, two arms up and down. Slowly, she finally made it! She hadn't been able to raise her arm that high in years, and was very excited. She wanted to pay the practitioner who taught her, but was surprised to learn that Falun Gong is always taught free of charge.

A Finnish practitioner who works in the U.S.A. went back to Finland for 3 weeks during Christmas one year. She took a lot of Falun Gong materials. She spread the Fa most of the 3 weeks at her hometown. In one of the photos about her teaching the exercises at her hometown on the internet, there were more than 20 people learning the exercises.

Practitioners often prepare a form for people who want to learn Dafa to leave their names and phones in trade fairs and expositions. Afterwards, practitioners will rent a place and call these people and teach them the exercises. The workload and expenses are born by the practitioners.

Over the past few years, Falun Gong practitioners spread the Fa and teach the exercises everywhere from the capital Helsinki to the Santa Claus village, Rovaniemi, from Vaasa in the western coast where people speak Swedish to Imatra, a city in the eastern part, from the open-air markets to pedestrian streets, from a variety of trade fairs to health Expos everywhere, from libraries to high school students' classes, and from the busy train stations to peaceful parks. People continue to learn the exercises and many ultimately begin to practice for themselves.