(Clearwisdom.net) On May 10, 2008, Falun Gong practitioners in Zurich, Switzerland, held a series of activities to clarify the truth of Falun Gong. People stopped to watch and read the truth-clarifying display panels. Many people signed their names on the petition calling for an end to the persecution.

People constantly asked, "Why does the Chinese Communist Party (CCP) persecute Falun Gong?" The practitioners answered, "Falun Gong teaches people to take Truthfulness, Benevolence, Forbearance, as their guiding principle. But the CCP, through lies and violence, provokes hatred among people to control people and even tries to control people's thinking. The CCP worried that once people could determine on their own what is right and wrong, good or bad, it couldn't control the people and their thinking, so they began to persecute Falun Gong." Practitioners also recommended that people read the Epoch Times' Nine Commentaries on the Communist Party, which systematically spells out the real essence of the CCP's evil nature. 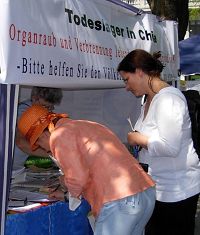 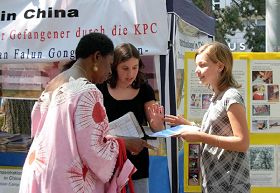 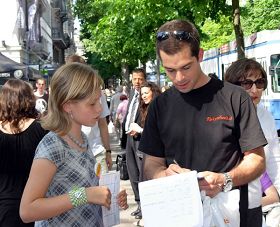 "I admire the spirit of Falun Gong practitioners"

Maria and her daughter, visiting from Austria, spoke briefly with the practitioners. Maria immediately signed in the anti-persecution signature petition. She said, "I believe that supporting people's freedom of belief is a good thing. I have heard of Falun Gong and I admire these people's spirit. There is no reason to persecute them. On the contrary, there should be support for them."

Maria's daughter, also named Maria, said that she had read reports about Falun Gong in the media. She said, "I cannot understand this persecution. I think that Falun Gong has nothing to do with politics, it is on a spiritual level, so I cannot understand why Falun Gong is being persecuted." She took some truth-clarification materials in Chinese and said she planned to bring them to her Chinese friends in Switzerland. Her mother wished to tell the Chinese people, "I hope that the Chinese people will eventually gain the freedom to live as they choose, and can achieve all that they believe is important in their lives."

Another visitor to the practitioners' display was Mr. Uspetery, a retired teacher. He listened to the practitioners' explanation, then signed the anti-persecution petition. He said he had learned something about the persecution of Falun Gong from his daughter. He commented, "The persecution of Falun Gong is paranoid madness by the Chinese Communists. Therefore, I signed the anti-persecution petition. I know that from now on, I may not get visas to go to China, but with China as it is now, I prefer not to go there." He added, "I very much respect Chinese culture, and I do not oppose the Chinese people. In fact, they are my very favorite people."

"I want to tell the facts to more people"

After signing her name, Ms. Yvee also took various truth-clarification materials. She said, "I feel that this (signature) is an opportunity to openly show one's attitude. I hope that all people here will have a role in disseminating the truth, and that you will be successful. I also hope that such a system as the CCP will come to an end."

Ms. Yvee read in the newspaper about the Chinese Communist Party's persecution of Falun Gong practitioners. She said, "For people in Zurich, it is difficult to envisage the [persecution]. I am very shocked just thinking about it. It is a real insult."

On the topic of the CCP's crimes of organ harvesting, Ms. Yvee said, "It seems that we have not learned from the lessons of the Third Reich. This has exceeded my imagination. Today, in 2008, how could such a thing still happen?" She added, "I will tell more people about this persecution. I hope that more people will stand up and make an effort to stop this sort of thing. We do not want to see this happen."

We Must Take Action to Stop the CCP's Live Organ Harvesting

Two teen-aged sisters carefully viewed the display panels and immediately signed their names to the petition to stop the persecution. One of them said, "We saw those photos (about the persecution), and we hope to help put an end to all of this. Live organ harvesting must be stopped, and it is necessary to take action. Collecting signatures like this is very good. I hope we can have a real effect, and I wish you success."

The Persecution Should be Stopped Immediately

Melanie and her friends carefully read the various panels regarding the torture of Falun Gong practitioners and the crimes of organ harvesting. She told her friends seriously, "We should sign." She talked with Falun Gong practitioners for a long time and said that in the past she was also engaged in many sports, and she has always regarded the Olympic Games as a very important event. However, she said she had a different view of the Olympic Games in Beijing. "For me, human rights are inalienable, human rights and sports are one. Sports and unfairness can never go together."

Melanie continued, "What the Falun Gong practitioners are doing is reasonable. It very clear: torture is unacceptable. Everyone has the right to clearly state his/her views, no matter what views he or she holds, what belief they have and what race they belong to. The persecution should be stopped immediately."

"We Must Help Stop the Persecution"

Two fifth-grade students, Sylvia and Vanessa, passed by the Falun Gong information booth and gladly accepted the truth-clarification materials. They signed the petition to end the persecution and told the reporters that they signed because, "We want to stop all this (persecution), it is very cruel, and it should not exist." They also enjoyed the Falun Gong practitioners' exercise demonstration and said, "We will tell other people about this, because this information is to stop the persecution. We would also like to stop the persecution."

The girls left, but they returned immediately and asked a Falun Gong practitioner, "We want to help now, do a good thing. What help we can provide?" Then they started to stack the newspapers and took the initiative to hand out the truth-clarification materials, ask for signatures, and talk to more people about what is taking place in China.

The youngsters told the reporters that they were very happy to be able to help. Then they added, "If possible, we'd like to put together a report for our school regarding the persecution of Falun Gong practitioners by the Chinese Communist Party."

They two girls stayed until the end of the event.

“Incidents of Falun Gong Practitioners from Linyi, Shandong Province, Being Persecuted Before the Olympics”