The audiences in Munich applauded the performers' skillful presentations, the beautiful pictures composed by performers on stage, and the backdrops. When Qi Xiaochun, the Erhu instrumentalist, played the last note, the people were still so deeply into the music that there was a moment of silence before she was greeted with thunderous applause.

Many people lined up to buy tickets before the performance and hoped they would not miss it. Several in the audience said that they really felt sorry that they couldn't see such a wonderful performance again this year.

Doctor Sabine Freundshuber said that she came to the performance by chance. She is from Passau in lower Bavaria and was on her two-week vacation in Munich. When she received a flyer about the performance, she liked what she saw and bought a ticket. 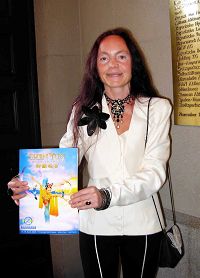 She could not find the right words to express why she liked the performance so much and just felt that it touched her soul, "It was really magic. It made you forget all your troubles, risks and surroundings. It was simply marvelous."

She said that she would recommend the show, "It is wonderful. Everyone should come to watch. It is unique and is the most beautiful show I have ever seen."

She also knew that the CCP had interfered with the performance and commented, "That was because the CCP cannot accept the principles of 'Truthfulness-Compassion-Forbearance' shown in the performance, and they even treat it as a threat. In fact, what the CCP thinks and does make people feel uncomfortable."

Very Interesting and Worthy of Being Experienced

Three people from the audience, Barbara, Diheidi, and Romanda, said, "We liked the performance very much." Their favorites were "Herding on the Mongolian Plains" and "The Power of Awareness" that revealed the reality of present China.

Italian teacher Romanda said, "I regret that the CCP reacts in such a way. I do not think that it is good that they react in such a manner. This is a totally new culture for us and people should be open to this. It is a very interesting performance and worth creating an opportunity to experience it."

The three ladies felt that it was unreasonable of the CCP to interfere with the performance and they couldn't understand why a show that promotes traditional Chinese culture cannot be presented in China. Barbara guessed, "Is it because the performance has some background of Buddhism and the CCP cannot tolerate it even though it is a very peaceful performance?"

Diheidi stated, "What was revealed in the performance is impossible to be accepted by the CCP. Present-day China is just like the former Eastern Germany. People struggle with each other and don't trust each other. The government is afraid of its own people and persecutes its people because of fear. So they want to destroy the performance."

“Ms. Zhang Li Tortured to the Brink of Death at Harbin Women's Prison”