(Clearwisdom.net) After presenting a successful Chinese Spectacular show in Kansas City, the Divine Performing Arts (DPA) took the stage at the Touhill Performing Arts Center, located at the University of Missouri - St. Louis, on the evening of April 30, 2008. The sponsor of the DPA show received formal recognition from the State Congress and city council, as well as greeting letters from the Governor, representatives from Missouri and city councilors.

From the first program, "Descent of the Celestial Kings" to the very last one, "Victory Drums," both western and eastern audience members warmly applauded and many praised the show's depiction of the five-thousand-year-long Chinese divine culture. 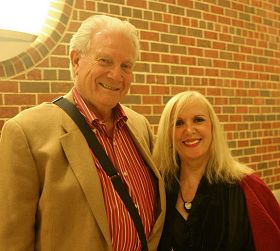 Mr. Murray Hochberg, a singer from St. Louis, said that this show was a completely new experience compared with Broadway shows. He and his wife were very impressed. He thought it would be like other Christmas shows, but marveled at the outstanding show of music, songs and dance.

Mrs. Joys Hochberg, a singer and dancer, called the show fantastic, beautiful and magnificent! She said it was the most glorious show she had ever watched.

After seeing the Chinese Spectacular, Mr. Jack Galmiche, president and CEO of KETC/Channel Nine, said the unique cultural show was "great art." "It's wonderful, it's very visual ... What I am seeing this evening is an expression of life in China that I haven't seen expressed in other forms of art before. This is something new to me." "I especially enjoyed the dance. I liked the drums, they are so powerful. The other thing I enjoyed about the program was the artistic expression of many of the dances. That was wonderful."

Mr. Galmiche said he particularly enjoyed "Nymphs of the Sea" and the "Mongolian Bowl Dance," which was, "...a great expression of how the women were able to dance and keep balance... perfect posture...it's wonderful."

Regarding the MCs introducing each performance in both English and Chinese, Mr. Galmish said he hadn't seen that type of introduction before. "I thought that was very good." He was also impressed by the innovative animated digital backdrops, some of which were hand-painted. "I do like the backdrop, of the visual images. I am amazed at the size, the magnitude of the performance, of the stage and how they use it. They helped in the understanding of the performances especially the vocal performances. It was nice to see the translations of the songs."

"I would give it a 10," said Galmiche. "The costumes are beautiful, the music is wonderful, the performers are wonderful, the dancers are absolutely outstanding." 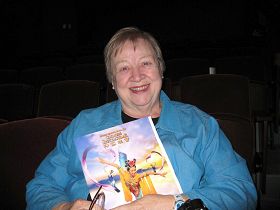 Sandy, a former secretary in federal government, said it was a magnificent and exciting show. Her favorite was "Nymphs of the Sea," and she said the coordination and accuracy of the dancers were so professional, and that every story was beautiful. She was saddened by "The Risen Lotus Flower." She said she must tell her friend to watch the show tomorrow. 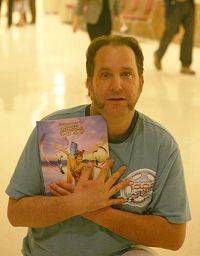 Among the audience was a local television producer who produced Big Brothers and Itch's Show, Donnie Blake. Mr. Blake said that he sensed the strength and liberating force of the Chinese culture opening up to him in this performing arts show.

Mr. Blake's favorite performances of the Chinese Spectacular were the opening number "Descent of the Celestial Kings" and "The Power of Awareness." "The dance of the three principles of Falun Gong ... the way that the culture had pre-existed long before recent events in the 20th Century. It seemed throughout the whole time that there was an immovable spirit of the people that I saw."

He also enjoyed "Lady of the Moon," which left a special impression on him. "When the archer was putting out [the nine suns], there were too many suns to have, but he got a little carried away and almost put out the last one. I thought, 'Well, don't get carried away, you've got to have at least one sun.'" The performance "Chopstick Zest" also resonated deeply with him. "The chopsticks stuck out because ... something playful like that. Those chopsticks could be made and reinvented. That was a neat experience."

Mr. Blake said the jokes and light banter between the hosts reminded him of "older time in America." He said the DPA was changing the world, and he would like to be part of it.

“Congressmen Applaud Falun Gong at Festival of the Arts (Photo)”