On May 13, 2008, Bulgarian practitioners celebrated World Falun Dafa Day by clarifying the truth about Falun Dafa and seeking the public's support in stopping the persecution in China. 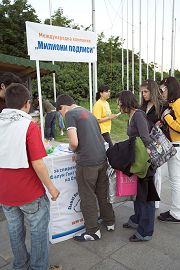 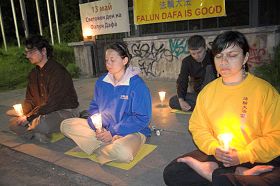 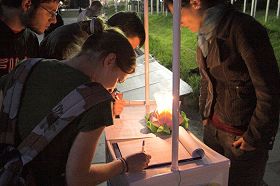 Bulgarian and tourists alike crowded around the petition stand to find out what was happening and were very curious to know more and support Falun Dafa.

When dusk fell over the capital of Sofia, practitioners held a candlelight vigil to commemorate practitioners who have died in the brutal persecution in China. Meanwhile, people kept coming and signing the petition.

Signature collection is part of the international Millions of Signatures campaign initiated by the Coalition to Investigate the Persecution of Falun Gong in China (CIPFG). So far, more than 800 signatures have been gathered in Bulgaria, while globally the number of signatures has reached almost 500,000. The petition will be handed to the International Olympic Committee to put pressure on the Chinese government to stop the persecution of Falun Gong before the start of the Olympics in August 2008.