... Falun Dafa practitioners are joyously celebrating the 16th anniversary of Falun Dafa's introduction to the public on May 13, 2008, with festivals and events to be held across the U.S. and worldwide; and

... Falun Dafa is an advanced exercise and meditation practice of mind, body, and spirit based on the principles of Truthfulness, Compassion and Forbearance; and

... More people are learning the practice and purifying their hearts, energizing their bodies, striving to create virtuous communities; and

... Falun Dafa's contributions to society has been widely recognized and honored around the world since Mr. Li Hongzhi introduced it to the public in 1992; and

... Falun Dafa transcends cultural and racial boundaries and contributes to the universal dream of a peaceful, tolerant, and more compassionate society; and

... Falun Dafa practitioners' determination and courage to stand up for Truthfulness-Compassion-Forbearance while facing severe persecution from the Chinese Communist Party has shown the world the value of life and the preciousness of human dignity;

, I, Jeannette A. McCarthy, Mayor of the City of Waltham, do hereby declare the week of May 11, 2008 to May 17, 2008, as Falun Dafa Week honoring Truthfulness-Compassion-Forbearance

In Testimony Whereof, I have hereunto set my hand and caused to be affixed the Great Seal of Waltham this 7th day of May 2008.

By: Jeannette A. McCarthy
Mayor 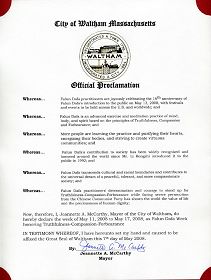 “The Joy of Returning”