EDMONTON--Sandy Helland, a truck driver who lives in Whitehorse, Yukon, took a flight to Edmonton specifically to see the Chinese Spectacular on the advice of her acupuncturist. She came to see the show on Monday night at Edmonton's Jubilee Auditorium and again Tuesday night. She saw it a third time Wednesday night, the last performance in Edmonton. 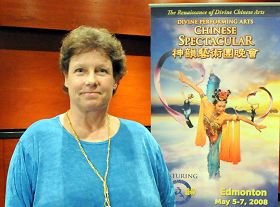 Sandy Helland at the Chinese Spectacular.

The reason? Helland feels the Spectacular has brought about a miraculous recovery from a spinal injury incurred when she was young.

"I live in Whitehorse, and I took a flight down here specifically for this show. I'll be going to work late, but I had to do this show. I heard good things about it, and good things are happening to me," she said.

"When I was four years old, my father drove over me with a bulldozer and a rock pushed my spine out of alignment. I've limped all my life since. And lately, since I'm now 52, I've been in more and more pain."

"I've waited all my life to have that healed, and through this show I am getting healed. I can walk and not worry about limping now."

She went on to describe her spiritual experience during the first two shows.

"I was so excited for the unexpected. I was looking for the mystery, and I sat and I made sure that I did not cross my arms or my legs throughout the first show last night. I allowed the show to greet me and meet me, and do its magic. It started last night."

"I had a tingle in my spine that was saying something was happening back there. Tonight, it finished, it has healed."

"It was a sensation of going upwards. It was building like a snowfall inside of me. This energy, it was very friendly. It was very overwhelming as well, but it got bigger and bigger and bigger, until finally, at the end of the show, I thought I was going to kind of jump for joy or burst out of my bubble. It was very exhilarating," said Helland.

"I had a zest for life, and I immediately had to grab onto somebody. It was good. I woke up exhilarated today, filled with life and joy."

Helland was highly impressed by the colors and the costumes, all of which are originally designed and handmade.

"I got more involved with the colors and the flowing garments. I've been knocked out both evenings by the costumes. I think they are spectacular. I love the silk. It is the finest of wardrobe on stage, for sure."

The New York-based Divine Performing Arts wound up the Canadian leg of its international tour with three shows in Edmonton May 5-7.

On its 2008 tour, Divine Performing Arts staged 220 shows in over 14 countries on four continents, reaching a total live audience of about 650,000.

“Canada: The Chinese Spectacular Transported Me to an Ancient and Graceful China (Photo)”