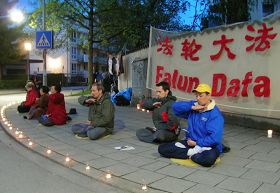 Candlelight vigil in front of the Munich Chinese consulate 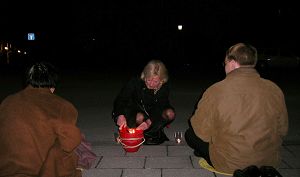 Banners exposing the brutal persecution and organ harvesting atrocities were held high at the candlelight vigil. People were shocked by the CCP's savagery. Many signed a petition to condemn the CCP's outrageous crimes. A German woman, after seeing the firm will of the Falun Gong practitioners holding the candlelight vigil, was deeply moved. She brought a large red candle, personally lit it and then placed it with the other candles. The flame of this large candle and the other candles together shone upon the night sky in front of the Embassy.