(Reporters Tang Ling and Wu Sijing in Linkoping, Sweden) In the evening of March 27, the Konsert & Kongress in Linkoping was packed. The performance by the internationally famed Divine Performing Arts (DPA) Company won applause and praise from the audience.

After the Communist regime Consulate's interference with the show was exposed by the media, the democratic and expression-freedom minded Swedes were outraged by this gross challenge of human rights, and many people spoke out to support the DPA show. At Linkoping, the DPA's tickets were sold out two weeks before the show. Some people complained, "Only one show at Linkoping? That's not enough!"

Member of Parliament, Karin Granbom said, "I like the show very much. It was something I have never seen before. Very beautiful performance; the colors are pure and bright; the choreography was pretty thoughtful and memorable." 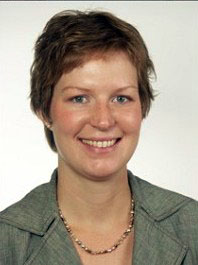 Member of Parliament, Ms. Karin Granbom said that it is important to stand up for freedom of speech. She said, "The primary purpose for me to be here tonight is to support the right to perform this show in Sweden. We do not accept the Chinese Communist Party (CCP) government's censorship and interference outside of China."

Member of Parliament: We want to welcome the DPA artists back next year

Mr. Finn Bengtsson, Member of Parliament from a Moderate Party, is also a medical doctor who did research in medicine for years. 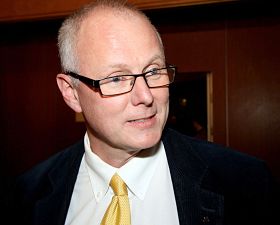 Mr. Finn Bengtsson said, "We support the DPA's performance and welcome the performance to come again next year."

He indicated that originally his intention for attending the show was to express his support to the DPA, to oppose the CCP's harassment and to protect the basic rights of the performers. Although he came to defend freedom of expression, he ended up having a wonderful time watching the show. Mr. Bengtsson was very happy for a pleasant evening.

Mr. Bengtsson said, "The show is fabulous; the dances are superb. The last program "Drummers of the Tang Court" was so spectacular! I want to tell all the performers: I especially enjoy the dances and the drumming." From the performance, Mr. Bengtsson learned that Chinese classical dances have three fundamental elements: body charm, body expression and technique. If blended together properly, the dances can accurately express emotions. This is the essence of performing arts. He also said that the message conveyed by the DPA artists is richer than ballet.

He said: "We should combine the best of the West and East. I am a believer of cultural exchanges between the East and West. It will benefit both cultures."

When informed that the DPA show will continue to tour Finland and other Scandinavian cities, he said, "We support this show and welcome them to come back next year."

Government Employee: It is very helpful for me to understand the Chinese culture

After the DPA show, a Chinese mother and her daughter happily talked to the reporter. Mother Qiu Yushang works in the Linkoping local government. She came to Sweden 29 years ago. Her daughter Yu'er is a high school student. She grew up in Sweden and speaks little Chinese. 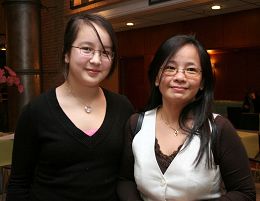 Yu'er is on the left; her mother on the right.

Ms. Qiu said she likes all the programs, and they are all wonderful. This show helped her to gain better understanding of Chinese culture. She said, "I especially enjoy 'Chang'er Flying to the Moon'; it is very interesting and profound."

Her daughter liked "The Risen Lotus Flower" the best. She said in Swedish, "I especially like the three words: Truth, Compassion and Forbearance. Every word is special and emits colorful light. They are simply extraordinary and impressive." She also expressed her admiration of the three women (Falun Gong practitioners), "They are so beautiful and steadfast. I really love them."