Denver Falun Gong practitioners marked the anniversary of the April 25th appeal with a candlelight vigil near the Colorado State Capitol. The practitioners renewed calls for the Beijing regime to end a nine-year campaign of suppression that has recently escalated with the approach of the Olympics.

Many vehicles slowed down as they approached our banners, and many passing motorists honked their horns after reading the messages on the banners, "China Concentration Camp Mass Killing Falun Gong Practitioners, Harvesting Organs, Cremating Bodies" and "Stop the Persecution of Falun Gong in China."

A reporter from an Asian media came out to conduct interviews and take photos of the event.

The practitioners said they could feel the serenity that night, and that it reminded them of the silent, peaceful appeal of 10,000 Falun Gong practitioners back on April 25, 1999. 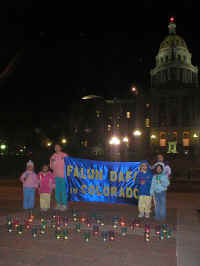 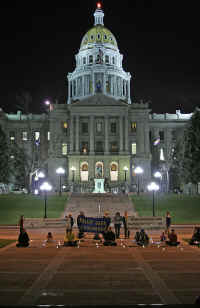