On April 25, 2008, Falun Gong practitioners formed a "Great Wall of Truth" in downtown Toronto to tell people in the city the facts about the nine-year-persecution of Falun Gong in China. The practitioners called upon the international society to condemn the brutality of the Chinese Communist Party (CCP) and help stop the persecution. 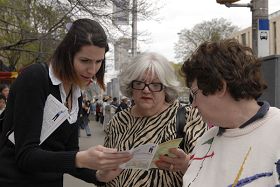 Practitioners explained the facts of the persecution of Falun Gong to pedestrians in downtown Toronto. 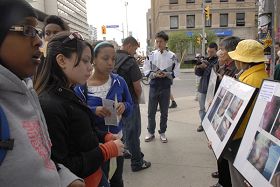 Practitioners explaining the facts of the persecution 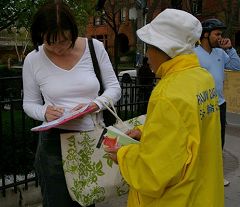 Many people signed the petition initiated by CIPFG calling for an end of the persecution of Falun Gong.

Zhang Rongxuan personally participated in the appeal on April 25, 1999. He said, "I stood right in front of the gate of the central government office buildings. We demanded a peaceful and fair environment for our practice and legal publication of Falun Dafa books. Everyone was calm. After we left, there wasn't a piece of paper or cigarette butt on the ground."

Mr. Zheng and his family all practice Falun Gong. He said that the Department of Public Safety in China started its investigation on Falun Gong in 1998. According to Mr. Zheng, the local public safety bureaus in Liaoning Province, where he was from, mobilized officers to infiltrate local Falun Gong groups and activities. "Many police officers worked undercover. They pretended to be practitioners and joined the study and exercise groups. They collected information on individual practitioners. Some of the officers realized that there was nothing wrong with Falun Gong and revealed their identities to the practitioners. They even told practitioners that, because Falun Gong believes in 'Truth, Compassion, and Tolerance,' it was absolutely not acceptable to the CCP, that the CCP would not allow any belief."

"After the peaceful appeal on April 25, local practitioners tried to tell the public the facts about the practice. However, the police continued to follow and harass the coordinators of local Falun Gong groups. The police even took pictures and videotaped practitioners while they were doing the exercises."

Mr. Zheng believed the CCP arrested practitioners in Tianjin City and somehow tricked the practitioners into going to Beijing to further appeal. The state media, Beijing's mouthpieces, later reported that these practitioners were violent protesters. The appeal in Beijing became an excuse that triggered the persecution.

Huaman, a passerby, told the reporter, "I didn't know this brutal persecution has been going on in China for nine years until after I saw these pictures. I am in shock that in the 21st Century there are still people being persecuted for their beliefs. I will do my best to help."

Many passersby signed the petition calling for the end of the persecution. The petition was initiated by the CIPFG, Coalition to Investigate the Persecution of Falun Gong.