Young Entrepreneur: "The Chinese culture should be kept alive" (Photos)

(Clearwisdom.net) Ada-Jasmin Kindermann, a young entrepreneur whose mother is from Taiwan, labels herself as having grown up in a "bi-cultural environment" and feels connected to China's culture. She regrets that the original tradition was not passed on to the young people in modern China.

"The children are very spoiled and parents neglect to teach their children about Chinese culture and tradition. This can be seen in the working life. Many Chinese no longer recognize traditional Chinese characters," said Kindermann.

She continued, "Calligraphy and also traditional Chinese Medicine -- these doctors are dying off, because there is no one left to whom they can pass it on. Today's young people are no longer interested." 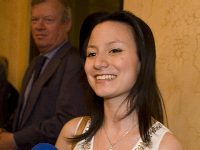 Given this background,she greatly appreciated the Chinese Spectacular. She attended the show on April 18th in the Munich Prinzregententheater. She hopes that with this show and further popularity in foreign countries, Chinese culture will be kept alive. She herself said that the show was an absolutely fantastic experience and something totally exceptional.

"I can only recommend this show to everyone, ask them to go and see this show, because one learns so much about Chinese culture. One is presented with much historical information from different regions in China and I must say again that this is an awesome experience. Absolutely wonderful," said Ms. Kindermann.

The most interesting portion of the performance was the scene about the persecution of Falun Gong in China. She said, "I must say that I find this a very interesting and successful potpourri, especially since the audience is presented with scenes depicting happenings from different centuries and also from the present. The audience will learn about Chinese tradition and culture."

Also Christiane Adamek and Lutz Scheicher, member of the Munich FDP [Free Democratic Party (Germany)] District Council (The Liberals) were in the audience of the Chinese Spectacular show in Munich. They both were very enthusiastic about what they had seen.

"It was absolutely awesome and very impressive," said Adamek.

They will remember the beautiful picture of the "Nymphs of the Sea," the subtlety and the gentleness, the musical interpretation, and overall the beautiful and graceful dances.

Both had heard about the pressure on the organizers by the Chinese Consulate. Scheicher also is quite aware of the difficulties faced by the Falun Gong practitioners in Munich.

'They demonstrate outside the consulate and have been ejected, although they only sit there and hold a banner in front of them," he reported.

He appreciates the determination by the concert agents who were not influenced by telephone calls telling them to cancel the performance.

"I find it very good that they did not give in to the pressure and let the show go on. The performance was excellent and very well attended. There will be a second show tomorrow and I will call tomorrow at least two or three friends and recommend that they come and see this show," he said.

He believed that the reason for the Chinese Consulate trying to exert pressure was their demand to be granted "sole right to represent China," while the Chinese Spectacular does not allow the Chinese party culture to exert any influence over its performance.

Adamek stated that the attempt by the Consulate to have the show canceled was "disgusting."

"We live in a free country and we have the freedom for the arts. And this show is truly art. And one should present all people the opportunity to come and see the show and judge for themselves. One should not have the right to forbid it beforehand. I'm completely against this," said Adamek.

In the end, the Consulate achieved the opposite from what it attempted. With its demands for banning the show, it advertised the show.

Scheicher wants to tell the Chinese regime to stop persecuting Falun Gong, "In particular, one should stop arresting Falun Gong practitioners, stop discriminating against them, and so on. We know that there are concentration camps in China and China should dismantle them."

"We wish China lots of success and luck -- but definitely in freedom," he said.