When the Master of Ceremonies said, "It is the fate that connects all of us," Mr. Wang, who arrived in Australia only two days before, couldn't agree more. The entire show touched his heart.

On the afternoon of April 15, 2008, Adelaide, a city in Southern Australia, was bathed in golden sunshine. The Divine Performing Arts Chinese Spectacular connected people from all over the world at the Adelaide Festival Theater, including Mr. Wang from Wuhan City, and others from Tianjin and Beijing. 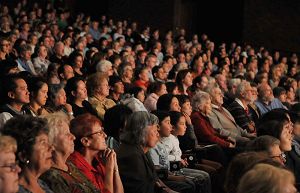 Mr. and Mrs. Wang came to Australia from Wuhai City, Hubei Province two days before the show to visit their grandson Neil. The three talked with a reporter after watching the Chinese Spectacular. 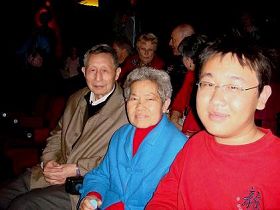 Mr. and Mrs. Wang from Wuhan City, China and their grandson Neil

Neil said the show reminded him of the traditional Chinese culture that he had almost forgotten after being overseas for so long. "The show has many stories about ancient China. Many Chinese born abroad may not know about them. This show can help them learn Chinese culture."

"I liked 'Lady of the Moon' most," he said. "I have read this story in a novel, and the stage show makes it real."

Mrs. Wang liked the Chinese ancient Dunhuang music, clothing and colors. She thought the show was very different from those in China. "In China there are not any shows like this one. They are all geared toward the young people. We never watch those shows."

Mr. Wang agreed and said, "In China today, you cannot find such a hig-level performance. And we have never even seen such a beautiful theater before," he added.

Charlie Li's family is from Tianjian and have lived in Australia for about three months. Charlie was most impressed by the the choreography in 'Nymphs of the Sea.' "This program has a great (visual) effect, and the music is good too. At the beginning, it shows the waves of the water, which is pleasing to the audience. It is original and creative, with three layers of water." He said, "And I also liked the Mongolian Dance. My father lived in Mongolia all his life so I know Mongolia."

John is from Beijing and is studying business in Australia. He has great appreciation for Chinese traditional arts.

After seeing the Chinese Spectacular, John and his friends talked about the show. "I think the background is most impressive, and the performers are outstanding," John said.

John said he liked "Drummers of the Tang Court" and "Lady of the Moon" the most because the pieces tell a beautiful ancient story. "Nowadays modern shows lack the taste of ancient culture. Chinese culture is different from that of other countries. This show has so many beautiful stories and it shows the rich content of Chinese culture."

John appreciated the singers' performances and felt that they were moving and powerful. He said, "I felt the energy behind it, maybe because of the regret of losing the culture - at least such traditional culture is difficult to find in mainland China. Now the Chinese culture is half-westernized. But the western culture only has a few hundred years of history; it can't carry the 5,000 years of Chinese culture."

Mr. Corben is a graphic designer at Macricer Design. "The spirit of various dynasties were brought to life by the show through costumes, dances, and drums. The design of the background left me speechless."

Ms. Slava Antonio is an Australian folk art appraiser. She and her husband Tony said of the Chinese Spectacular, "Powerful words presented the noble principles of truth and compassion. It's very good. Very beautiful."

“Overcoming Each Tribulation with Pure and Firm Faith”