Mrs. Maria Choi, a Korean immigrant in Australia, went to the Chinese Spectacular in Sydney on April 5 with her children. She said: "We all think the show is fabulous. It exceeded our expectations. We will come to it again next year." 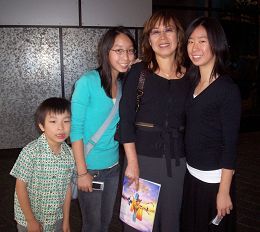 Maria and her children

Choi compared the differences between Korean and Chinese drums, and said her favorites programs of the show were the drum dances. Choi said: "Although I am not an actor, I can tell the dancers are very professional and extraordinary. They must have been trained in a traditional way." "These actors manifested their spirits perfectly," she said: "I like their beautiful costumes too. The 3-D background scene design was unique. The whole show was a like a colorful dream."

"From this show I learned about the persecution of Falun Gong in China. The government has no right to suppress people's belief. I support Falun Gong practitioners to expose the brutality of the persecution in this way." "I also agree with the message passed in the show--'Truthfulness-Compassion-Forbearance,'" she said.

Choi's daughters liked "Nymphs of the Sea" performance. The oldest daughter said: "The show passes positive messages to the audience. There are evil things in society. We need truth, compassion and self-control. The world needs the balance and the positive side of humanity."

“Some Understandings about Cultivating with an Open Third Eye”