Jessica Brown and her friend attended the Chinese Spectacular by the Divine Performing Arts in Canberra, Australia on April 12, 2008, and they expressed great admiration for all of the programs.

Ms. Brown began taking dance lessons at age three and now owns a dance company. She told the reporter that she enjoyed the show tremendously and loved the dazzling costumes, and that she wanted to apply the techniques she saw in the Spectacular to future dance compositions. 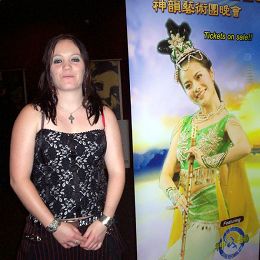 Ms. Brown said, "I learned different types of dance and I took part in all the dance competitions in high school. I now do mostly street skits and modern dance. The artists of the Divine Performing Arts are truly exceptional and extremely gifted--they are a force to be reckoned with! Anyway, I thought today's performance was extraordinary. These performers fully manifested the unique subtlety in the form and bearing of Chinese ethnic dance as well as mastery over difficult acrobatic moves, all of which was a great learning experience for me. What impressed me the most was the excellent combination of both power and tender grace expressed through elegant style and posture, and how even the slightest movements were imbued with incredibly rich emotions. They made it look effortless and it flowed like a spring brook."

"My favorites were 'Drummers of the Tang Court' and 'Nymphs of the Sea'. It was amazing to watch, because I really couldn't believe how they could dance so beautifully."

Mary is the host for a community TV station, and she watched the Spectacular with her mother. She gave the show high marks.

"They are very passionate about their craft, and they exhibit great skills. Obviously, they are very proud [of their heritage], and the performance is simply impeccable." She also appreciated the ideas conveyed in the Spectacular, "They want to persist in their beliefs. Well, this is a democratic country and everyone deserves freedom of speech. Some people communicate a message through theatrical and visual arts."

"Watching this show was a very interesting experience. I didn't know what to expect, but they brought the other side of performing arts--storytelling, and the ideals shared by this group, to the Australian audience. It's fantastic. They stepped forward and spoke up for their belief. I respect that and their performance was delightful."

Ms. Brown commended the performers, "The legends they adopted and interpreted on stage reflects the mystical parts of Chinese history. The entire troupe is enormously talented. For me, it was not only a feast for the senses, but also an exciting and inspiring journey."

Salas Whittle is the chief executive officer for a senior care center. She learned about the Spectacular through a friend and brought her daughter Jane Whittle to see the last show in Canberra on April 12.

Salas said the Divine Performing Arts show was engaging and charming, and she especially enjoyed "Nymphs of the Sea," "I loved the one where they danced above the surface of the ocean. It was stunning to say the least! The costumes were regal, and the dancers were so graceful! I think the way they handled the fans was very unique and attractive."

Jane was greatly impressed by "Drummers of the Tang Court," "I reveled in the entire show. The sheer variety of colors was mind-boggling! The drummers stood out, because they were simply exquisite!"

“What They Do Is for the Sake of Others”