(Clearwisdom.net) The Divine Performing Arts (DPA) premiere show at the Brisbane Convention and Exhibition Centre was held on April 7, 2008. Many distinguished guests, including politicians and well-known figures from various sectors, attended. The Spectacular guided the audience through time and space to re-experience the essence of traditional Chinese culture, which is based on pure kindness and beauty. After the final curtain call, many people in the audience lingered on, sharing their feelings about this inspiring experience.

Queensland state MP Ian Rickuss and his wife Ann attended the cocktail reception prior to the show and saw the Chinese Spectacular afterwards. Mr. Rickuss commented, "It is excellent and the visual effects are amazing. It's very artistic and with such depth to combine the ancient dances and the ceremonies with backdrops designed with modern technology."

When asked which performance he enjoyed most, Mr. Rickuss said, "The dances are very good.The entire show is outstanding, as they depicted some true stories in Chinese history, kind and peaceful stories."

Mr. Rickuss also commented, "I liked the baritone. His voice is very nice." He also said the narrators' introduction in fluent English was very helpful for Australians like him to understand the meaning of each piece. He said the dancers were very skilful and they must have spent many years in training to have such superb skills.

Federal Liberal Party Senator Mark l Party r ely unique.s a magnificent spectacular perfd peaceful stories. Furner was deeply touched by the excellent performance and the amazing backdrop technology, "This is truly a magnificent, spectacular performance. My wife and I visited Beijing in 2000 and saw some dances and acrobatic shows, but they were no match for the show this evening. This is totally unique."

Senator Furner said that he was most impressed with the dances and the costumes. "They were dazzling! Perfect! This is really magnificent. I have enjoyed it very much."

He said he was very interested in Chinese culture, and through the Spectacular, "I have learned more about the profound Chinese culture. It is very easy to understand the stories in the performances. The atmosphere was very lively. I saw people around me all enjoying the show very much and saying how much they enjoyed it in their own way."

He said that he liked the dance "Nymphs of the Sea" and the drum dance most. He used two words, "splendid" and "outstanding," to describe the entire performance and said he felt very good and peaceful. "I think I have spent a lovely evening here."

Federal MP: I shall recommend the Chinese Spectacular to my constituents

Federal Senator Bruce Scott attended the cocktail reception and saw the performance. He said, "The Chinese Spectacular has shown us colors, humanity, and techniques that we have not seen before. It shows us, who live in the 21st century, a vivid, 5000-year-old culture."

Mr. Scott said that he really enjoyed the show and was deeply impressed with the Chinese culture, its traditional dances and music. He said, "Today we have seen dancing arts that can be tracked back 5000 years. Maybe modern ballet also originated from the Chinese culture. The 'Drummers of the Tang Court' and the 'Mongolian Bowl Dance' were very nice. It's amazing that the soprano hit such high notes. It was really beautiful."

Mr. Scott's constituency is Maranoa, in west Queensland, about 600 kilometers away. There are quite a number of Chinese people in Maranoa. "We are living in a wonderful world, but we must not forget the 5000 years of Chinese culture." He continued, "I think the Spectacular represents the traditional Chinese culture, and people should learn more about the Chinese culture." He also said with a smile on his face that he would recommend the show to his constituents, even though it means they have to drive 600 kilometers to see the show.

Consul General of Italy: The choreography is amazing, absolutely outstanding

Mr. Francesco Capecchi, Consul General of Italy, said, "The show was absolutely beautiful, very inspiring. The colors are very bright and exquisite. I was looking forward to it. I did not know much about the Chinese Spectacular, but I was very curious. The performance was very enjoyable. The choreography is amazing, absolutely outstanding."

Mr. Capecchi said he liked every performance and thought the themes were very uplifting, but if he had to choose, it had to be the "Drummers of the Tang Court." "The drummers were all very lively and it was just so inspiring."

Judge and Chairman of the Friendship Association of Taiwan: The dances are very nice, very beautiful

Mr. Steve Quadrio is a judge and Chairman of the Friendship Association of Taiwan. He spoke highly of the Chinese Spectacular, "I like it very much, and it's just so beautiful. You don't see this kind of culture in the performances in Australia. The dances are very beautiful, so beautiful, very exquisite. I think my little daughter would love them."

Judge Quadrio said the Spectacular is promoting traditional Chinese culture, "Chinese traditional culture has been destroyed under the Chinese Communist regime. I know the situation of Falun Gong in China. I have been to China and know Falun Gong is being persecuted and have read about people like Lawyer Gao Zhisheng, who has been defending Falun Gong for years. I think the performance is not only about Falun Gong, but to pass on and promote the five thousand years of China's traditional culture heritage."

Head of Taiwan Office of Economics and Cultural Affairs in Brisbane: Culture does not know any boundaries

Mr. Tian Zhongguang, Head of the Taiwan Office of Economics and Cultural Affairs said, "I feel it has shown the essentials of the Chinese traditional culture, such as loyalty, filial piety, benevolence, and brotherhood, such as the story about Yue Fei. The historical stories show strength and beauty, truth and goodness. It is very inspiring."

Deputy Consul of the Philippine Consulate in Brisbane: This is the best show I have ever seen

Reena Johnson, Deputy Consul of the Philippine Consulate in Brisbane, said after the show that this was the best show she had ever seen and that the performance was as spectacular as its name. "My feeling is that it was just so magnificent, just like its name 'Chinese Spectacular.' I really liked their costumes and the rich colors. I liked all of it. The forms and compositions were amazing, very beautiful, and very colorful. They have shown the original China, different from today's China. It was truly beautiful."

Reena Johnson was deeply touched by the message in "The Risen Lotus Flower." She said, "'The Risen Lotus' shows the suppression of people under Communist rule in China. It shows it through the dance movements. There is no need for language. It has, in fact, had a big impact, and it shows that they [Falun Gong practitioners] are a group of very peaceful people."

Well-known former rugby star Mal Meninga also came to see the Spectacular. In the 1990s he led the Australian rugby team to sweep Europe and won the title of "Best International Rugby Player" and the Gold Root award. 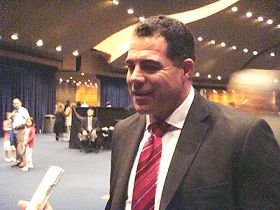 Mr. Meninga said he liked the Chinese Spectacular very much, "The performance depicts China and her long traditional culture. The dances and music are very nice, very enjoyable. The performance was very unique. I liked it very much. Australia only has 200 years of history, but China has a history of five thousand years, which deserves to be appreciated."

In the end, he said, "In fact, I don't know much about Chinese history. Tonight's performances, the dances and music, are rather thought-provoking, and the stories in the performances have profound significance. The performances enable us Australians to have a different understanding about Chinese culture. In the past, we only knew about things like the lion dance and acrobatics. This show looks at things in a unique way and I enjoyed this experience. What I find hard to understand is that the traditional culture is being suppressed in China."

“Practitioners Ms. Liu Fengmei, Mr. Huang Cheng and Others from Jinzhou City, Liaoning Province Have Been Imprisoned for Over a Month”