Visitors to Paris can feel art in the air. Paris is a city with well preserved artistic traditions, such as the Arc de Triomphe, the Eiffel Tower, the Louvre, and the Sacre Coeur Basilica. There are over a hundred museums in Paris that collect the world's art treasures. Artists who grew up in this environment no doubt have high standards when it comes to the arts.

From February 29 to March 2, the Divine Performing Arts (DPA) performed four shows at the Palais des Congres in Paris. Many local artists were impressed when they came to see the show. 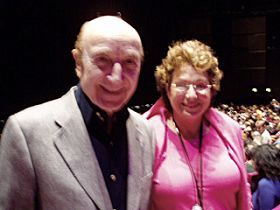 Roland Cope, a popular actor, and his wife Monique

Roland Cope, a popular actor, and his wife Monique came to the show. They applauded enthusiastically throughout. Roland's wife stood up and yelled, "Absolutely wonderful!" after the show. Roland said, "The show is of top quality- it is extraordinary and full of poetry. I can feel a strong power that is very natural. This type of dancing is rarely seen in Europe, or for the matter in Paris. The show addresses the past, present and future. What's unique about it is that it conveys a great power, which is magnificent. The backdrop was special. Presenting the persecution of Falun Gong in dance form is also very unique."

Monique said excitedly, "The show is a combination of Chinese dance and classical dance. For me, it comes from China but not the current China. The show is trying to return to the traditional Chinese culture. It is full of love and friendship. I think the Bowl dance and the Drummers of the Tang Court are marvelous, they lift people's spirits." 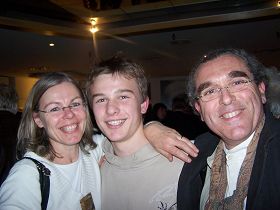 Alam, a violinmaker in Paris

Alam, a well-known violin manufacturer in Paris, said after the show, "The DPA's show is top of the class, and stunningly colorful. I wish it would have lasted longer... The scenes are exceptional and absolutely professional."

Marie-Silvia Manue is the President of the Compagnie Mascarille, a teacher at a film and acting school, a director and an actress. She considered the DPA performance to be of world-class, "It's wonderful. I had a great two and half hours. This team is very outstanding in the art and in the technicalities. I have never seen such a performance before." 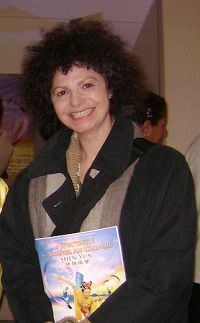 Marie-Silvia Manue (right) is the President of the Compagnie Mascarille.

"For me, China is magical and beautiful," said Marie-Silvia, "I've always wondered about China because of its rich history. The culture still influences us and touches us. The show was a rich treasure that tells us the past, stories of miracles, and of kind Chinese people. No one has ever told us this before. The China the DPA presented to us is completely not the current China we see in our mind."

"I am a director, actor, writer, and a teacher. From the aspect of technicality, the DPA's standard is definitely superb. Every artist is absolutely great, both male and female. They not only have the shape of dancers, they also have the endurance of athletes and skills of acrobats. Their techniques are perfect. The hand movements, the taste for art, and the costume design are outstanding. The costumes are just superb and combine tradition and creativity. Every scene is stunning. I felt as if I entered the forest of Chinese culture with full blast of sound and vision and all the colors. Amazing!"

"The choreography, of course it's not modern dance. It is creative in using the classical dance. It totally respects the pureness of the original classical dance. For example, the girls' and boys' beauty and elegance have power, the power of lightness that is very precise. Everything is original, like the drum dance, the Mongolian men's chopstick dance, Mongolian women's bowl dance and fan dance. They are out of this world."

Marie-Silvia continued, "This show demonstrated another China to us, an amazing magical China that might be hidden and is being destroyed. The DPA did a precious thing. It preserves the (magical China) for us. I think this is great. They pursue pureness, a real China that has no politics, no deterioration, no revolution, no destruction and is like a phoenix reborn."

"On the stage, the bad guys wore black and the knife and axes were in red. Nothing sends out a clearer message than this," said Marie-Silvia. She ended the conversation with, "The dance is not beseeching, but to stop the violence and let everything become good and peaceful. This is not weak but a lively, energetic and constructive way to pursue peace."