Three Divine Performing Arts performances that were originally scheduled to take place on February 26, 2008 at the KBS Theatre in Pusan, Korea were canceled due to pressure from the Chinese Communist Party (CCP). This resulted in KBS unilaterally reneging on the contract. This is not an isolated incident. Since the Divine Performing Arts launched its global tour this year, people all over the world have embraced the show and held it in extremely high regard due to its pure beauty, goodness, and its ability to illustrate profound Chinese culture through stage art. Past experience has proven that the Communist Party's interference not only failed to achieve its purpose but instead served to intrigue more people to learn about and see the Divine Performing Arts, after which they recognized the Party's inherent nature of making orthodox culture and traditional values its enemy.

The Divine Performing Arts of New York and the Divine Performing Arts on Tour joined efforts and performed an 11-day, 15-show run at Radio City Music Hall in New York City that began on January 30, 2008. After the initial performances, the two groups parted ways and traveled to Asia and Europe, respectively. The Divine Performing Arts, with its magical tour-de-force, presented 5,000 years of Chinese culture and ancient virtues in a seamless and insightful, yet exquisitely graceful manner, touching countless hearts, both Western and Eastern. The show received rave reviews, including comments such as "a magnificent performance" and "the whole world should watch" from numerous audience members.

Due to intense political pressure from the Chinese Embassy in South Korea however, the Divine Performing Arts' three scheduled shows were canceled after KBS terminated the rental contract. Prior to the incident, the Chinese Embassy made phone calls to the Ministry of Commerce, Industry & Energy, Ministry of Culture & Tourism, the National Theatre of Korea, and the KBS network, in addition to issuing diplomatic papers demanding that KBS terminate its contract with the Divine Performing Arts. This is a rehash of an old tactic the Communist Party employed back in 2007.

This year, the four performances by the Divine Performing Arts in Seoul over three days concluded on the evening of February 24 amidst a standing ovation and thunderous applause. The scene was just like the scene in "The Power of Awareness," where droves of people stood up for justice and rallied behind the persecuted Falun Gong practitioners, which constitutes a splendid picture of good defeating evil. 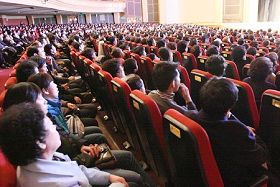 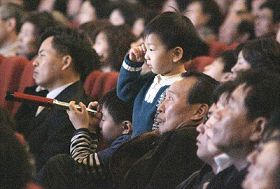 Audience with their eyes on the stage 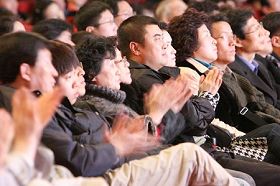 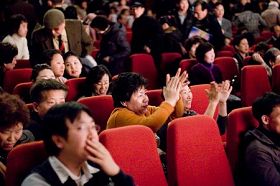 Audience lingers in their seats after the show

Sang-soo Ahn, the Grand National Party leader in the National Assembly praised the Spectacular, saying, "The show is both gorgeous and brimming with divine compassion, which evokes wonderful images in one's mind. The dances are quite rhythmic and refreshing, which makes one feel marvelous and filled with energy. I could not take my eyes away from the stage for even one instant. I made the right decision by coming [to the Spectacular]. It was absolutely worth the trip." 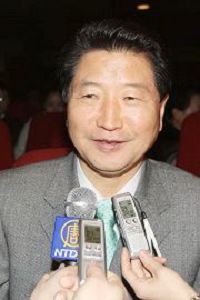 Sang-soo Ahn, a National Assembly member said, "I could not take my eyes off the stage."

Piao Shunu, a renowned Korean costume designer saw the Spectacular twice and took detailed notes. She said, "I saw it yesterday and I've come again today. No other program has intrigued me so much that I have to see it twice in a row. I think the female dancers' costumes are a wonder!" 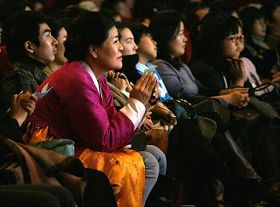 South Korean bass vocalist Xin Guikun couldn't help but let his excitement pour forth, "The performances by the Divine Performing Arts are truly astounding! Very elegant and intricate. They flow naturally like brooks in the spring. They are clean and wholesome, and purify the audience in the process. The dance and music complement each other perfectly like parts of an integral whole. The Divine Performing Arts is a masterpiece that transcends human imagination and makes one forget one's own existence, as if one has been elevated out of this world. I think it was God who guided me to watch the Divine Performing Arts." Xin Guikun expressed heartfelt joy at the fact the theater was filled to capacity, including all seats on the third balcony, despite interference from the Party.

Bo Hi Pak, president of the Korean Cultural Foundation said, "I'm moved completely beyond words! In short, it was a magnificent performance. The Spectacular sends a wonderful message, an eternal truth, and that is Truth-Compassion-Tolerance. I firmly believe that world peace is possible only when the entire world has seen this show." 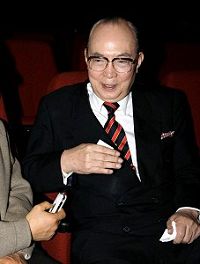 Kim Seung-Soo, former Presidential Secretary for Judicial Reform took a stand by saying, "It is not OK to cancel an artistic performance due to political reasons in a democratic country where artistic freedom should be guaranteed. I hope the performance in Pusan will be successfully held."

Sang-soo Ahn, Grand National Party leader in the National Assembly said, "The freedom of staging a public performance in Korea should be protected from external interference."

The Party's heavy-handed interference is not only unconscionable but also constitutes a violation of the Pusan peoples' right to appreciate Divine Performing Arts in their own country.