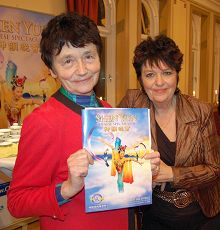 Eva Selin Lindgren, a professor as well as a congresswoman, said such a good show should be presented to every Nordic country.

(Clearwisdom.net) On the night of March 25, the Divine Performing Arts (DPA) Touring Company concluded its third show in the Circus Theater in Stockholm, Sweden. The top-of-the-line performance presented the essence of traditional Chinese culture and deeply moved the audience, who offered warm applause at the end of the show.

Among the audience was Eva Selin Lindgren, a professor as well as a congresswoman. She said such a good show should be presented to every Nordic country.

Ms. Lindgren is from northwestern Sweden. She once worked as a professor at two universities. At present, she is a congresswoman. She felt all the programs were very good and lively.

She said she could also understand all the programs. The performers used body language to convey their messages, which was very easy to grasp.

She enjoyed all the programs and the underlying messages, giving high marks to the captions on the digital background and the wonderful introductions given by the hosts.

Ms. Lindgren once traveled to Thailand and Taiwan, but she never saw anything on this scale. This show was fundamentally different from others. "If the Divine Performing Arts comes here again, I'll certainly come and watch it again."

“Additional Information on the Death of Mr. Zhou Qingyu in the Chongqing City Detention Center”